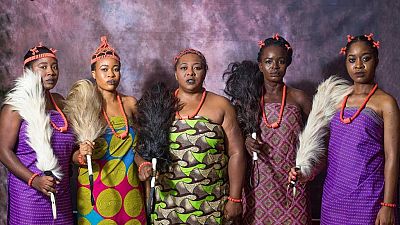 Just after the Aba Women’s War, the women of Oloko, Abia state are riding the waves of rebellion and victory to take charge of their lives after the dispute with the British.

Sparked by a dispute that occurred on November 18, 1929, between a woman, Nwanyereuwa and Emereuwa, a man who worked for the Warrant Chiefs on imposing tax on the women of Oloko which was traditionally wrong.

The Women’s War remains an important historic event that speaks about the underestimated strength of women who came together and showed courage, bravery, rebellion and even sacrifice while fighting an oppressive system.

In the aftermath of the War which ignited the revolution in the defense of women’s rights in Nigeria, the August Meeting was inaugurated.

The fight for women empowerment is unending and the advocacy of women’s rights on the ground of equity and equality is still crucial as demonstrated in the lack of inclusion of women in Nigerian politics.

Depicted in a play written by Paul Ugbede, produced by Chioma Onyenwe and directed by Kenneth Uphopho, the August Meeting takes a critical look at the steps taken by the women of Oloko after the war for total liberation.

The play highlights the story of the women of Oloko and their leader Nwanyereuwa as they demand for control over their lives and battle old customs that relegate women to the background.

The August Meeting examines themes that are extremely topical such as gender equality, women participation in politics, monopolized power, women as second-class citizens, motherhood, family and domesticity. It highlights the problem with patriarchy and the need for women empowerment.

The “Aba Women Riot” was led by women in the provinces of Calabar and Owerri in Southeastern Nigeria on November and December, 1929 in the British colonial history.

Thousand of Igbo women at the time organized and held a massive revolt against the British colonial policies in Southeastern Nigeria.