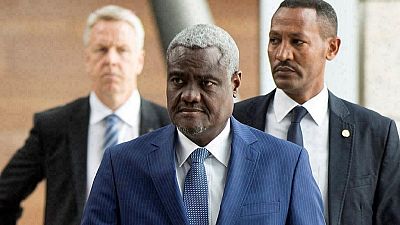 A statement released by the Chairperson of the African Union Commission, Moussa Faki Mahamat has called on all political stakeholders in Cameroon to exercise maximum restraint and refrain from any statement or action that could heighten tensions in the Central African nation.

Moussa Faki revealed that he is closely following the developments in Cameroon after the October 7 polls and urged that all claims relating to the electoral process be handled through the existing legal mechanisms.

The document however indicated that a preliminary statement on the conduct of the polls and the extent to which they complied with the African Union normative framework on democratic elections will soon be issued.

His statement comes in at a time when the country is facing serious tensions after an opposition candidate, Maurice Kamto, leader of the Movement for the Renaissance of Cameroon in a press conference claimed victory in the October 7 polls and asked the incumbent president Paul Biya to prepare for a peaceful transition.

The Minister of Territorial Administration Paul Atanga Nji reacted firmly to such declarations indicating that only the Constitutional Council is allowed to announce results, and that any form of challenge to the verdict would “not be tolerated”.

While some Cameroonians greeted Kamto’s declaration with cheers, a good number of them remain skeptical about the faith of the country should the constitutional council announce contradictory results.

The country is currently in a stalemate as denizens are religiously counting down on the fifteen days deadline for the constitutional council to release official results.