About 2,000 Tigray rebels return to Ethiopia from Eritrea 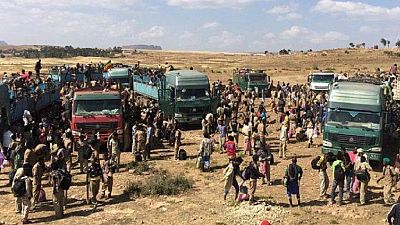 The latest batch of ex-rebels returning to Ethiopia from Eritrea are the Tigray People’s Democratic Movement (TPDM). Over 2,000 of them are reported to have returned home on Tuesday.

Leadership of the TPDM held talks with the Eritrean government in Asmara in late August. they agreed to return home to pursue peaceful political struggle.

The group was formed in 2001 shortly after the two countries fought a costly border war which led to deaths of tens of thousands of people. The ensuing years were of a standoff between them.

All that changed in July 2018 when Prime Minister Abiy Ahmed signed a peace deal with Eritrean president Isaias Afwerki to end the “no peace, no war” situation.

Before the peace deal, both countries accused each other of harbouring anti-peace elements claims that each part rejected in same measure.

Other former groups based in Eritrea that have returned home include the Patriotic Ginbot 7 fighters, soldiers of the Oromo Liberation Front, OLF. In each case, Asmara hosted peace talks between the rebels and Addis Ababa.

In August 2018, Ethiopian Prime Minister’s office said he had instituted a project office to oversee the implementation of an agreement with former rebel groups.

Its creation according to Abiy’s chief of staff, was necessitated after the government reached an agreement with key opposition parties. There were no further details of the particular parties involved.

The agreement covers disarmament, demobilization & reintegration of former fighters. PM Abiy appointed Tesfaye Yegezu to lead the Project Office (under the PM’s Office) tasked to coordinate this effort, a tweet from the chief of staff read in part.

Since his coming into office in April 2018, Abiy has led a multi-sectoral reform of Ethiopia’s government machinery. Key planks of the reforms have included unbanning rebel groups as terrorist organizations.