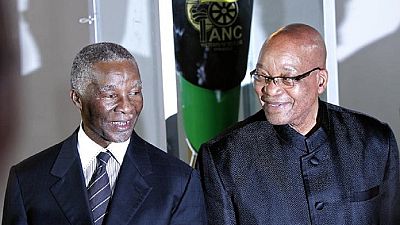 South Africa’s ruling African Nation Congress (ANC) has resolved to reach out to former presidents of the party and the nation, Thabo Mbeki and Jacob Zuma, whom it accuses of raising views that contradict ANC’s policies.

Party officials on Monday told journalists that the National Executive Committee had discussed Mbeki’s statement that questioned the ANC’s plans to amend the constitution to allow for expropriation of land without compensation.

In that statement, Mbeki said the ANC had been transformed into a racist blacks only paty by former president Jacob Zuma.

The national executive committee took a position at its national conference on these matters and officials will continue to engage our former presidents.

Zuma, on the other hand who was recalled from the office of president by the party in February, recently embarrassed the party when he claimed that state capture does not exist despite the fact that he had called upon his compatriots at the ANC conference to set up a commission of inquiry to investigate state capture.

“My view, and I’m not disagreeing with anyone, is that these are political decorated expressions. There is no state that is captured, even when people try to describe it, worse when they give evidence,’‘ Zuma told students at the Walter Sisulu University in the Eastern Cape last month.

Now the party says it will reach out to the former presidents, which ANC’s secretary general Ace Magashule says clearly contradict the party’s policies.

“The national executive committee took a position at its national conference on these matters and officials will continue to engage our former presidents.”

It’s not yet clear how the former presidents will be approached on these issues.