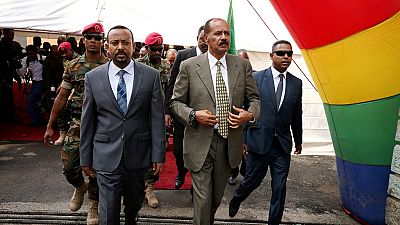 Eritrea’s representative at the just ended 73rd United Nations General Assembly, UNGA, dedicated the entire address of the country to making a forthright demand for Security Council sanctions to be lifted.

Foreign Minister Osman Mohammed Saleh dedicated the three-fourths of his speech to bemoaning injustices that his country has and continues to suffer demanding that the 2009, 2011 sanctions be lifted.

The first part of his speech as with the other speakers congratulated the president of the session before be recounted the July 8 peace deal signed by President Isaias Afwerki and Prime Minister Abiy Ahme of Ethiopia.

Perhaps, the biggest damage was the regional instability and insecurity that this state of affairs bred and exacerbated. The actual cost incurred and the opportunities forfeited - both at the national and regional levels - are thus huge.

He said in part: “Its positive dividend (the peace deal) for regional peace and security is too palpable to merit emphasis. This is indeed attested by new frameworks of all-rounded cooperation that have been set in motion in the past two months or that are on the offing at the regional level.

“Eritrea wishes to express its gratitude to various countries that contributed in different ways, and that have demonstrated their political goodwill, to the success of the historical process underway,” he stressed.

Full text of second slot of the address

“Let me now revert to a perplexing injustice that has afflicted my country for almost a decade. I am referring to the unwarranted sanctions that were imposed on Eritrea in December 2009 and 2011 respectively.

“With positive winds of peace flowing in our region, several UNSC member States are these days calling for the immediate lifting of the deplorable sanctions. The diplomatic discourse is not however fully coherent.

“As it happens, some countries are looking for procedural and other pretexts and preconditions. The apparent aim is to move the goalpost and maintain the illegal sanctions on Eritrea.

“As an aggrieved party, which has stood for nine long years on the receiving end of the miscarriage of justice, Eritrea cannot and will not plead for clemency or magnanimity. The people and government of Eritrea will continue to stand up for their rights until justice is ascertained and wrongs meted to them are redressed.”

The Minister in the third portion took potshots at known persons and governments he said were behind the sanctions regime using among other terms, transgressions … against Eritrea, hubris and perverse power games, absence of justice, unlawful and unfair sanctions etc.

He summed up what he said was the interplay of forces and factors that brought about the sanctions. Slamming successive U.S. governments, the UNSC for letting Ethiopia continually and flagrantly abuse international law and agreements and that the sanctions were to serve the agenda of major powers.

Full text of final part of the address

“The sanctions imposed on Eritrea for the last nine years have entailed
considerable economic damage to the country and unnecessary hardships on its people.

“The related campaigns of smear and defamation have inculcated immeasurable damage to the reputation of the country and to the prospects and potential of investment. Perhaps, the biggest damage was the regional instability and insecurity that this state of affairs bred and exacerbated. The actual cost incurred and the opportunities forfeited – both at the national and regional levels – are thus huge.

In the event and in light of the widely acclaimed peace and cooperation that has broken in the region, certain countries to choose to ignore the stark truth and to prolong the sanctions regime in Eritrea is astounding.

In the past six decades, the Eritrean people have waged long and difficult
struggles to advance the cause of justice and to foster a climate that is conducive for mutual security and stability in the region. These robust convictions and legacy ha e indeed enabled them to withstand all the wrongs and scars inculcated by the unfair sanctions. Through characteristic resilience and hard toil, they have now vanquished the injustices perpetrated on them.

As I stressed earlier, the people of Eritrea have not committed a crime or
transgression that impels them to seek clemency. As such, they are not only calling for the immediate rescinding of the sanctions but they are also asking, and deserve, amends for the damages incurred and opportunities forfeited. I thank you!”