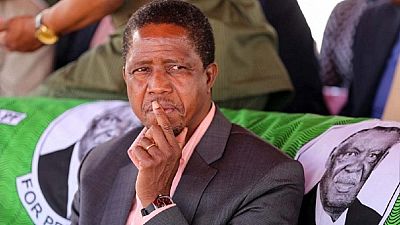 Around 100 demonstrators protested Friday in front of the Zambian Parliament in Lusaka against corruption in the government, as the Minister of Finance presented her 2019 draft budget to MPs.

The protest was organised by a consortium of non-governmental organizations and had the rare approval of Zambia’s authorities.

“We are protesting because of the way the public money is being spent in Zambia and endless corruption, scandals that we hear, the unsustainable debt that the country now owes and importantly because all this means that our poor and our vulnerable are having to live much much worse life than they could,” said Laura Miti, the protest organizer.

As demonstrators marched, Finance Minister Margaret Mwanakatwe presented a budget of €6 billion in the wake of international aid cuts.

The United Kingdom, Sweden, Finland and Ireland have suspended their assistance to Zambia after over $4m meant for a social assistance programme for the country’s poor was stolen.

Since his re-election in 2016, president Edgar Lungu and his government have been regularly accused of corruption and authoritarian drift by their political opponents.

In June 2018, the Financial Intelligence Centre (FIC), Zambia’s anti-corruption watchdog released a report that found some cabinet members and presidential aides had siphoned billions of Zambian kwacha from government coffers through money laundering.

In September of 2017, several activists were arrested and charged with ‘disobeying lawful orders’ after they staged a protest outside Zambia’s parliament to highlight the abuse of public funds, particularly the procurement of 42 fire trucks by the state for an alleged cost of $42m.

In August of 2017, Zambia dropped treason charges against opposition leader Hakainde Hichilema. Hichilema, leader of the United Party for National Development (UPND) and five others had been arrested in April and charged with treason after his convoy failed to make way for President Edgar Lungu’s motorcade.

Human rights campaigners had slammed the charges as political persecution.