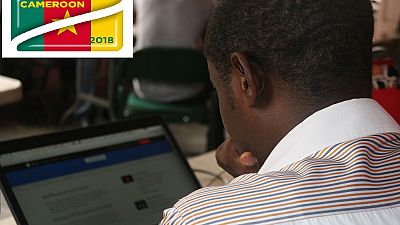 Activity on Cameroon’s social media space has intensified ahead of the October elections as users share footage of abuses and politicians tweet their every move in a bid to engage voters.

Nine candidates are contesting the October 7 poll, including President Paul Biya, who has ruled the country for 35 years and is hoping to be re-elected for a sixth time.

But this time, the 85-year-old broke with media tradition by announcing his candidacy on Twitter, a key indicator that social media is taking a central role in this year’s presidential election.

There is much greater potential in terms of reach than when their words are communicated through the written press or the radio.

During the last election in 2011, only a handful of candidates were using social media. Today, almost all of them have a dedicated team to ensure they are very much present online.

One of Biya’s main challengers is Joshua Osih, head of the opposition Social Democratic Front (SDF), who has taken to engaging with voters online.

When he came under fire for “unpresidential behaviour” after posting a picture of himself at the airport in Paris, he hit back immediately on Twitter, saying that was exactly the point.

“I want to break with protocol and everything to do with the myth around the presidency,” he wrote. “I want to be close to the people I rule and not shut up in a palace.”

“There is much greater potential in terms of reach than when their words are communicated through the written press or the radio,” she said.

For Owono, this increased presence online is the result of a significantly higher rate of internet connectivity in Cameroon.

Figures released earlier this month by the ministry of postal and telecoms services show connectivity jumped from a mere 0.24 percent of the population in 2011 to 35 percent last year.

“There has been a fall in the cost of internet access and network quality has also improved,” she said.

Although the official launch of the election campaign is only due to start on Saturday, social media is already highlighting prominent topics, especially the security crisis in Cameroon’s English-speaking regions.

Blighted by armed conflict, the two regions have remained largely inaccessible to the media and NGOs but those involved in the fighting have used social media to expose purported human rights violations by the other side.

Since the conflict began at the end of 2017, footage of alleged abuses involving both anglophone separatists and Cameroonian soldiers have been doing the rounds almost every day on social media.

A military policeman with his head cut off, villages burnt by the army, and even scenes of torture: all these excesses caught on camera are used by both sides to try and discredit the enemy.

Faced with the surge of horrific footage spreading online, the government has called for calm, denouncing the “inappropriate use of the internet”.

Both the increase in hate speech and the proliferation of “fake news” are proving to be “a threat to our right to reliable information, above all in an election period,” said Communications Minister Tchiroma Bakary.

In July, the minister dismissed out of hand a video purportedly showing abuses by Cameroonian soldiers in the country’s Far North Region, where troops are deployed to root out Boko Haram jihadists.

Several weeks later, an investigation was opened and several soldiers were arrested.

“The main challenge regarding the use of social networks is disinformation,” said Janvier Ngnoulaye, who heads an NGO called Internet Society Cameroon.

With less than three weeks until the vote, Biya’s supporters, who see him as best placed to handle the separatist crisis and the threat posed by Boko Haram, maintain that footage of alleged abuses by the army was put online in order to sabotage his re-election bid.

In fact, the campaign has sparked an online war of images: when one side posts pictures of roads in disrepair, the other responds with photos of huge construction projects, such as the motorway between Yaounde and Douala.

Earlier this month, a misleading rumour began circulating on social networks suggesting that Yaounde was going to shut down internet access during the vote, as happened in Mali in August.

But such fears are not entirely unfounded.

In early 2017, as the separatist protests multiplied in Cameroon’s English-speaking regions, Yaounde sought to stamp out the unrest by cutting off internet access in the two areas for over three months.