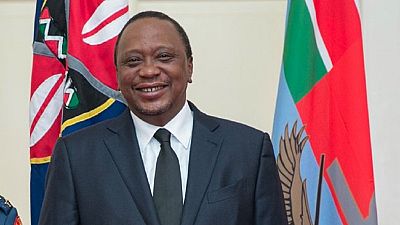 Kenyan President Uhuru Kenyatta signed a new finance bill into law on Friday, cutting in half a new fuel tax that had led to public anger and strikes but stopping short of demands to scrap or delay it.

The government, under pressure to hit IMF-mandated fiscal deficit targets, had faced a fuel dealers’ strike, anger among commuters and a lawsuit after transport and fuel prices jumped when a 16 percent value-added tax (VAT) on all petroleum products entered into force on Sept. 1.

Plans for the tax on fuel had been postponed several times since 2013. Parliament voted last month to delay it for another two years, but President Uhuru Kenyatta returned the bill to lawmakers with the suggestion they cut it to 8 percent instead.

Parliament approved the bill with the lower rate on Thursday during an acrimonious session marked by loud protests from lawmakers. The bill also adds other new taxes, and authorizes revenue collection and spending through June 2019.

“I have signed into law the Finance Bill 2018. I give my commitment that I will ensure proper utilisation of public resources for a better Kenya. I will not relent on the war against corruption,” Kenyatta wrote on Twitter after the signing.

I have signed into law the Finance Bill 2018. I give my commitment that I will ensure proper utilisation of public resources for a better Kenya. I will not relent on the war against Corruption. WilliamsRuto pic.twitter.com/oDPNc8ElVG

Kenyans have been angered by the new taxes, accusing authorities of forcing them to dig deeper into their pockets, while the government presides over wastage of its revenue through theft and corruption.

“I will ensure proper utilization of public resources for a better Kenya. I will not relent on the war against corruption,” Kenyatta wrote on his Twitter feed.

Courts have charged dozens of senior government officials and business people with crimes related to corruption in a new crackdown this year.

An IMF stand-by credit facility for balance of payments support expired last week, complicating Kenya’s economic outlook at a time when emerging markets have entered into turmoil as contagion from Turkey and Argentina spreads.

Kenyan assets have had a mixed reaction to the wider emerging markets turbulence and the government’s fiscal challenges at home.

Investors who use dollars as their base currency would have lost 5.7 percent on Kenyan bonds since the start of the year, currently one of the worst performances across emerging markets this year barring the main trouble spots of Turkey, Argentina and Venezuela.

The Kenyan shilling weakened against the dollar after the expiry of the IMF facility last week but it has since recouped its losses.

On the stock market, the benchmark NSE-20 share index and the all share index are firmly in bear territory, having lost 20 percent of their value in recent weeks from their peaks this year.

Yields on the local government debt market have however held steady mainly due to a cap on commercial lending rates, which market participants said was putting a lid on the yields.

Out in the real economy, ordinary people said the new tax on fuel was already biting.

“Customers are complaining because they have to spend more,” said John Thuita, a petrol pump attendant in Nairobi.

“If a customer used to come after a week, now they are coming back before the week is over.”