Eritrea and Djibouti have agreed to normalise ties following a regional meeting, ministers said on Thursday, a decade after a border spat led to brief military clashes.

“After a long period of separation, Eritrea and Djibouti have agreed to restore ties,” Ethiopia’s Foreign Minister Workneh Gebeyehu said on his Facebook page.

The leaders of Ethiopia and Somalia, who met Eritrea’s president Isaias Afwerki in Asmara on Wednesday, had agreed to initiate dialogue to resolve the long standing border dispute.

Djibouti in July petitioned the United Nation’s security council, asking the body to ‘facilitate an agreement between them upon a mutually acceptable means of peaceful dispute settlement’.

Djibouti on Thursday welcomed a high level delegation composed of the three foreign ministers of Somalia, Eritrea and Ethiopia.

‘‘This is the season for peace in the Horn of Africa and this peace should be inclusive to all,’‘ read part of Afwerki’s message to his counterpart, President Ismail Omar Guelleh of Djibouti.

Eritrea's Foreign Minister Osman Saleh conveyed President Isaias's greetings to President Ismael Omar Gelle and underlined that “this is the season for peace in the Horn of Africa and this peace should be inclusive to all”. The Delegation was received by various senior Ministers

The rapproachment follows the dramatic thaw in relations between Ethiopia and Eritrea, which declared an end to their state of war in July and agreed to open embassies, develop ports and resume flights between the two countries after decades of hostilities.

Eritrea has been subjected to a U.N. arms embargo since 2009 over allegations that it provided support to militants in Somalia and for failing to pull troops out of disputed territory with Djibouti. Asmara denies accusations it backed Somali insurgents. 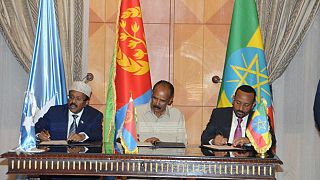 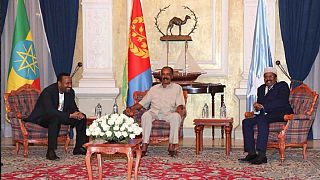 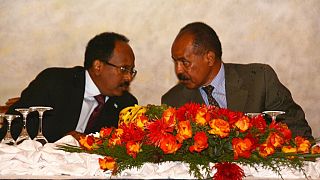