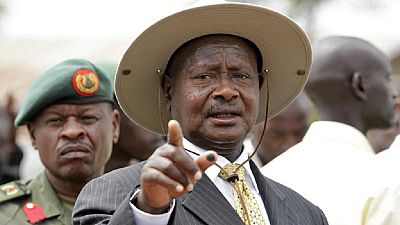 Ugandan president Yoweri Museveni has reportedly charged about his capacity to dissolve the legislature in the wake of a parliamentary probe into government torture, the Observer newspaper reports. https://www.observer.ug/news/headlines/58601-museveni-i-can-do-away-with-parliament

Museveni, 74, in an August 27 meeting warned a section of ruling National Resistance Movement (NRM) lawmakers that it will not be the first time that it will be happening in Uganda’s history.

He reportedly went ahead to make reference to the period between 1971 and 1979 when there was no parliament. Incidentally that was a period that he had yet to become president.

It was during the regime of President Idi Amin. Museveni – then an army general – assumed office in 1986 and has been president since then, winning elections that has usually been contested by the opposition.

“Between 1971 and 1979, there was no parliament…Don’t think that you are in heaven; do what took you there. You should know where the power of that parliament comes from… in fact, I can do away with that parliament,” Museveni is quoted to have said.

“And we brought it [parliament] back, so do whatever you are doing knowing…” he added. Local media reports that the president also expressed his disatisfaction with the parliament’s decision to institute an adhoc body to probe the incidents arising from a violent by-election campaign.

He is said to have suggested that the committee was a waste of time because it lacks capacity to summon soldiers for instance. He also wondered how diplomats had been allowed into military camps to visit detained MPs.

About five MPs including famous Bobi Wine and over twenty opposition supporters were detained by security agencies after Arua election chaos. The group known as Arua 33 have since appeared before a magistrate and have been granted bail.

A number of MPs are on record to have challenged the president over his alleged comments. “We want to tell you, Mr President; go ahead and dissolve parliament. We cannot be intimidated by your threats.

“In any case, you’ll not be the first to do so, Idi Amin did it in the 1970s and ruled without a legislature, you can also go ahead and do the same after all none of the MPs was born in parliament neither will they be buried in parliament,” said.

“Parliament as an institution cannot die at the whims of one person unless he wants to overthrow the Constitution. Parliament is not cabinet that he presides over, it is an independent arm of government whose roles and functions are clearly outlined in Articles 77, 78 and 79 of the Constitution,” Lwemiyaga legislator Theodore Ssekikubo told the press on August 31.