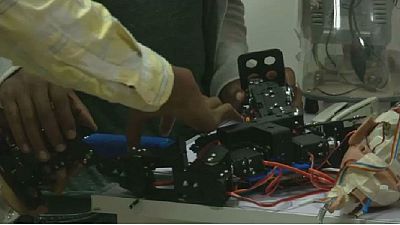 What if, 20 years from now, robots walked the streets alongside humans, doing many of the same jobs that you and I do today?

There is no question for Ethiopian developer, Getnet Assefa that Artificial Intelligence (AI) makes this a reality.

Assefa is a scientist and co-founder of iCog Labs, an AI research space in Addis Ababa.

iCog was part of a team of scientists that developed the software for Sophia – the world’s first humanoid robot.

Sophia has even learnt some Amharic, the developers say.

Designed with high cheekbones and a slender nose, the robot, who is also a citizen of Saudi Arabia can display 60 types of facial expressions and carry a conversation.

Yet, few people know that Ethiopia, one of Africa’s fastest growing economies is home to a team of developers that worked in collaboration with it’s creator, Hong Kong-based, Hanson Robotics.

“iCOG Lab is one of most strongest AI outsourcing company in Africa. We have a part in developing of world leading robots in emotional and expressions. We are building a world leading AI block chain platform we call it singularitynet.io. We are a core participant of this one. So, I can say we are in the leading edge of AI and block chain. But nobody thinks that this image is true. Nobody thinks that this is reality,” said Assefa.

iCog has customers in USA, Canada, Hong Kong and China and at home, works with the government on software and hardware development.

Assefa says AI and other kinds of innovation, given the right support, could give Ethiopia the push it needs to catch up and bypass other countries.

Prime Minister, Abiy Ahmed, in power since March this year, has already promised major economic reforms, his government says are designed to unleash the potential of the private sector.

While, internet access remains among the lowest in the region, Assefa sees more opportunity than ever before under the leadership of PM Abiy.

“Dr Abiy is from IT background, so I think he will understand what type of problem we will face, so I hope within a year or two… three years, things will be changed, definitely. I mean, we are even seeing that one of our problems is internet connection. We were paying 1000 (US) dollars or 2000 dollars for having a very small internet connection that we cannot even see video and yesterday everything is changed, we can now have a double internet connection. This is one example that we are seeing that,” said Assefa.

iCog is currently working with high schools and universities across the country to introduce computer science and help create a generation that is ready to operate in the new age of AI.

But Assefa says there will be little progress if challenges of limited internet access, lack of incentives and support for young developers are not quickly addressed.

“If a kid in Gambella… if he creates software and he wants to expand it across Africa, or Ethiopia how do you evaluate that software? How much is that software worth? Is it the next snapchat or the next facebook, how did you evaluate that one. There is no way of evaluating these types of softwares in Ethiopia, to get loan or to get fund or to have some sponsor or funding or something. That is what i am saying. If you go to investment office, there is no incentive for software developers or exporters. There is no category,” he said.

In 2016, a World Economic Forum (WEF) report showed that disruptive labor market changes, including the rise of robots and artificial intelligence, would result in a net loss of 5.1 million jobs over the next five years in 15 leading countries.

Some researchers say there is no need to panic and that AI will never advance to human levels. It is actually expected to create a growing demand for certain skilled workers, including data analysts.