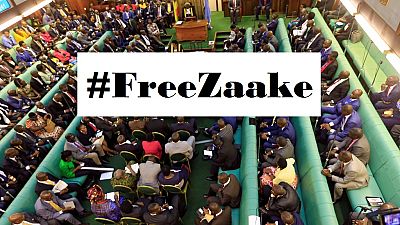 Police in Uganda have finally charged a tortured and bedridden legislator with treason and unlawful escape.

A human rights lawyer in the country, Nicholas Opiyo, also added that MP Franis Zaake has been bonded in order to allow his travel outside for medical treatment.

The police have charged the Hon Zaake with treason & unlawful escape & bonded him for a month to allow him travel for medical treatment. All this while he is on a hospital bed under police CMI guard #FreeZaake #RespectRights pic.twitter.com/W19phR6V73

After he was arrested, tortured in detention, charged for treason, blocked from traveling, musician turned lawmaker Robert Kyagulanyi known as Bobi Wine has finally arrived in the United States to seek specialized treatment.

But Ugandans have since switched from the viral #FreeBobiWine campaign to #FreeZaake as they push for Bobi Wine’s fellow legislator who was also tortured but has been the opportunity to seek attention abroad.

Francis Zaake and Bobi Wine were picked up by Uganda’s elite presidential unit, SFC, after an electoral campaign in the Arua municipality turned chaotic. They were arrested along with over thirty others after president Museveni’s convoy was stoned.

The duo were, however, subjected to torture by the SFC but Zaake reportedly escaped from police custody. He has since been in hospital and a request by his family to fly him to India for treatment has proven unsuccessful.

Unlike Bobi Wine who has been charged with treason in a Gulu Magistrate court, he has yet to be charged by police with photos showing him in precarious state in hospital. Several attempts over the weekend failed.

Like Bobi Wine, he was also stopped from flying out late last month. As at today, government lawyers are said to be assessing him but its is not known if their report will determine whether he is allowed to leave or not.

“As we start a new week, let’s remember our struggle continues, especially when the world’s not watching. Hon. Zaake is still being denied access to doctors of his choice. We continue to do what we can to have him released. We ask you to do the same. #FreeZaake, CountryBeforeSelf,” a former army commander Mugisha Muntu wrote on Twitter.

Despite our best effort whole day today, we have to this hour not been able to get MP Zaake to travel for medical treatment. The decision chain seems blurred & obtuse. We will return to this earliest tomorrow. Continue to pray for Hon Zaake. He is in pain #FreeZaake pic.twitter.com/KIjCKzxXcz

Bobi Wine is an MP, so is francis zaake.
Both Bobi Wine and zaake were in the same place(Arua) on the same day and probably “committed” the said crimes together.
Why #FreeBobiWine and remain holding Hon.Zaake given the health conditions he is in right now?? #FreeZaake #FreeZaake pic.twitter.com/annkzKZ0ya

MP Zaake tortured by SFC, ears & fingers cut, health deteriorates while in detention so they drop him off at Lubaga #FreeZaake
NRM:

Bebe Cool calls those who don’t agree with NRM cockroaches, to earn a living, he tries performing for some roaches,they pelt him with bottles

I think HEBobiwine should have ended his previous tweet with #FreeZaake

What does the regime want with this young man? Why fear people they claim to rule? #FreeZaake. Let us Ugandans take care of him since our GovUganda has chosen to be his tormentor. https://t.co/8Jeewzz57i

God will make a way for our country even if its not today. Where justice will be the order of the day. Where people won’t be tortured for speaking the truth. When we all have equal right to access anything we want. That day will come #FreeZaake