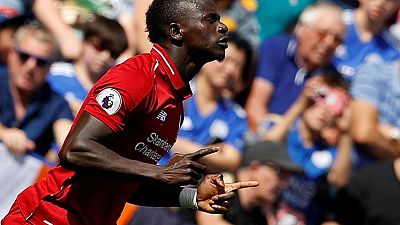 Senegalese forward Sadio continued his impressive start to the 2018/19 season of the English premier league season, scoring his fourth goal in four matches to help the Anfield side to a win over Leicester.

Liverpool beat Leicester City 2-1 to post a fourth successive Premier League victory but conceded their first goal of the season after a nightmare mistake by new keeper Alisson at the King Power Stadium on Saturday.

Mane gave Liverpool the lead in the 10th minute after good work from Andrew Robertson before Roberto Firmino headed home from a James Milner corner on the halftime whistle.

Mane scored two goals in Liverpool’s opening game against West Ham and was also on the scoresheet against Crystal Palace last week.

The Senegalese captain was recently handed the famous Number 10 jersey, which many of his fans was a fitting reward for his prolific form over the past two years at Anfield.

Liverpool’s other African stars include Mohamed Salah of Egypt and Naby Keita of Guinea. Both have also impressed in Liverpool’s perfect start to the season.

It was however Liverpool’s Brazilian goalkeeper, signed last summer for a fee of up to $84m who made all the headlines.

With Liverpool two goals up and cruising, Allison opted for clever footwork instead of simply clearing his lines and was robbed of the ball by Kelechi Iheanacho, who centred for Algerian Rachid Ghezzal.

Last week Alisson was praised for a piece of neat footwork against Brighton but this unnecessary mistake, prompted by a poor backpass from Virgil van Dyke, brought back instant memories of Loris Karius’s errors in the Champions League final.

Liverpool fans all over my tl with Allison, time to bring this back. The Absolute GOAT. pic.twitter.com/7yP9qJ9KkJ