Miguna Miguna set to return to Kenya 'after September 4' 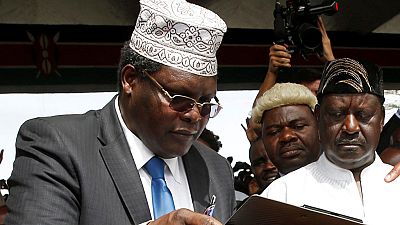 Kenyan opposition politician, Miguna Miguna, has declared that, in two weeks time, he will make a third attempt to return to the East African nation.

Miguna, who officiated the symbolic inauguration of opposition leader Raila Odinga as the people’s president in January this year, was subsequently charged with treason and deported to Canada on February 6.

‘‘I am coming back after September 4th. Viva!’‘ read part of Miguna’s tweet.

I am coming back after September 4th. Viva!

For the cowards with low self-esteem celebrating the fact that UKenyatta and RailaOdinga destroyed my valid Kenyan passport and my house, abducted, detained and tortured me before forcefully removing me, mark this in PERMANENT INK: I am coming back after September 4th. Viva!

His Kenyan passport has since been destroyed by Kenya’s immigration department, as the government maintains that Miguna ceased to be a Kenyan citizen when he was granted Candadian citizenship.

The question of citizenship

A government statement issued in February when Miguna was first deported, explained that Miguna fraudulently acquired a Kenyan passport in 2009 without seeking and reapplying for Kenyan citizen as prescribed by the new constitution.

It is not clear whether Miguna, who has previously refused to apply for a new Kenyan passport, will be travelling into the country with his Canadian passport.

While several court orders have been issued directing the government to provide Miguna with a passport and facilitate his return, the immigration department is yet to comply with any of them.

Before Miguna cancelled his previously scheduled return on May 16, the immigration principal secretary, Gordon Kihalang’wa, had this to say.

“The department cannot issue Mr Miguna with a valid Kenyan passport as he has not made any application for the same. Moreover, and without prejudice, we reiterate that Mr Miguna has to regain his Kenyan citizenship before being issued with a Kenyan passport,” Maj-Gen Kihalang’wa said in a letter to the Kenya Human Rights Commission.

Miguna, who has since fallen out Odinga has repeatedly accused the government of committing gross human rights abuses and electoral injustices. He routinely uses his social media accounts on Facebook and Twitter to urge his supports to resist what he describes as an illegitimate government.