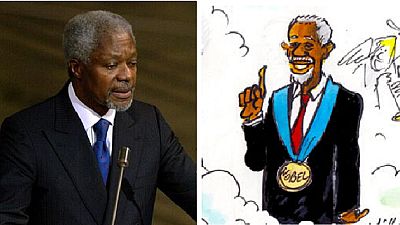 Kofi Annan was a known fan of the arts; he honoured concerts, met with heavyweights in the entertainment industry and was particularly a keen fan of cartoons.

Annan has been hailed by people in the industry for his role – direct and indirect in championing the cause of using the arts to reach across to others.

“After an outstanding diplomatic career, the former United Nations Secretary-General, also Nobel Peace Prize, gathered press cartoonists from all around the world in 2006 at UN: he wanted to build a bridge between press cartoonists and the various cultures on the planet,” Plantu, president of the group wrote in a tribute.

The group which has 183 editorial cartoonists from 64 different countries have since published 11 pieces in honour of their former honorary president. Their main aim is drawing for a better understanding and respect between people of different cultures and beliefs.

Several other cartoonists across Africa have also done works on the Kofi Annan effect. Over in Hollywood Forest Whitaker has paid respects along with the crew at Sesame street.

[TRIBUTE]
We are all very saddened by the passing of Kofi Annan, Honorary President of Cartooning for Peace.
It leaves a big void but also a beautiful inspiration to the cartoonists of the world. https://t.co/qnOeJwQpjr

My colleagues ndula_victor iGaddo and I had the privilege of meeting the former United Nations secretary General and Nobel Peace Prize laureate KofiAnnan in 2010 at his KofiAnnanFdn in Switzerland. What a humble man! Fare thee well grandpa… pic.twitter.com/4lKdurrmhV

May the soul of our brother ,father and son of the soil KoffiAnnan rest in power

KOFI ANNAN DID NOT JUST PUT OUT WORDS HE FOLLOWED THROUGH WITH ACTION!!! REST IN PEACE AND POWER #KOFIANNAN ♥️♥️?? pic.twitter.com/q4rUuZPVZT

We lost a great man, Kofi Annan was an advocate of the world's most vulnerable populations. His legacy will never be forgotten. pic.twitter.com/2IkaGnn6ca

Tribute to Kofi Annan – I was honoured to meet with Kofi Annan in 2005 because he liked one of my cartoons in THE NATION newspaper about him . So I gave him the original drawing . cartoonmovement CartooningPeace globalcartoons #KofiAnnan nationnews veen_th pic.twitter.com/oarB8Xo2b1

[EDITORIAL]
“Cartoonists from around the world pay tribute to #KofiAnnan ”
Our weekly editorial is online on our website https://t.co/WQoO0jJXc8

We mourn the loss of Kofi Annan, a relentless champion for peace and a passionate ambassador for Sesame Street and the world’s children. pic.twitter.com/b0ovPdQ8I9

Regarding his peace efforts in Syria one of my cartoons on Kofi Annan in March, 2012 in Khaleej Times, Dubai and New York Times Syndicate… RIP Kofi Annan pic.twitter.com/cDPRB5nCL1

.CartooningPeace advocates for cartoonist around the world and promotes cultural understanding, PatChappatte explains the importance of this organization for Annan. pic.twitter.com/kx3G6l9g20

Kofi Annan was a wonderful man, I will miss his calm presence on this earth. For 12 years, he was President of ⁦CartooningPeace⁩, of which I am a charter member. He believed in the power of editorial cartoons for good. His spirit lives on. #KofiAnnan ⁦KofiAnnan⁩ pic.twitter.com/60QA5yt1XV