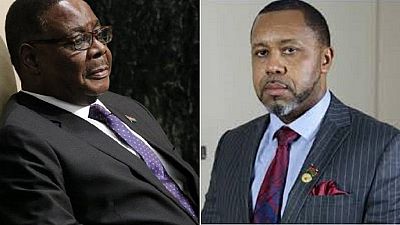 As the political fallout between Malawi’s president Peter Mutharika and his vice president Saulos Chilima deepens, a ruling party politician has proposed that the constitution is amended to allow the head of state to fire his deputy.

Chilima, who quit the ruling party in June, saying corruption in the government had reached an ‘alarming rate’, has since launched his own party and announced his intentions to contest for the presidency in the 2019 elections.

Chilima, who launched his his United Transformation Movement last month, has alraedy had his security detail drastically reduced, in a move that his supporters describe as political harassment by the ruling party.

Now, local media outlet Malawi 24 is reporting that Brown Mpinganjira, a member of the Democratic Progressive Party, says the president should be allowed to hire and fire a vice president, as is done with cabinet ministers.

“We need to allow the president to dismiss the vice president so that there is mutual respect between the two. The four presidents we have had in multiparty Malawi have had problems with their vice presidents. All four cannot be bad people. There is something wrong that is structural so let’s correct that from the constitution,” said Mpinganjira.

Former Malawi president Joyce Banda, also former her own party when she was fired from the ruling DPP party, which was at the time led by the late President Bingu wa Mutharika. Banda was Bingu’s deputy by the time she was fired in his second term of office.

Banda then became president when Bingu died in April 2012.

Banda’s relationship with her deputy Khumbo Kachali also turned sour in 2014 after she overlooked him as her running mate in the run up to the 2014 elections.

President Bakili Muluzi who was Malawi’s first freely elected president, serving from 1994 to 2004 was deputised by Justin Malewezi. They got on well for nine years but in 2004 Malewezi resigned from the ruling United Democratic Front when Muluzi named Bingu as his successor.

Malawi’s constitution provides for a presidential system whereby the president is both head of state and head of government, and of a multi-party system.

The president is chosen through universal direct suffrage every 5 years. The president has the option of appointing a second vice president, who must be from a different party.