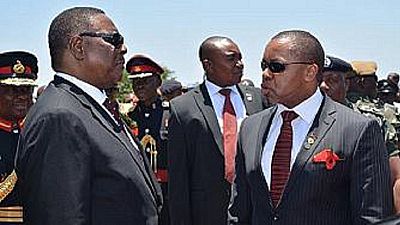 Hardly a week after Malawi’s vice president, Saulos Chilima announced his bid for the 2019 presidential elections, government has reduced his security detail, transferring dozens of police officers assigned to his office.

Chilima launched his United Transformation Movement on Saturday in the capital, Lilongwe, Chilima, and said he would tackle corruption if elected president.

The president, Peter Mutharika has already been nominated by the ruling DPP party to stand for a second five year term.

Chilima’s spokesman, Pilirani Phiri told journalists in Malawi that officers who had manned his two official residences and accompanied his motorcade have been transferred, leaving him with seven personnel.

“What this means is that when the vice-president is traveling, he will be required to hire private security to guard his family and the official residence, which is government property,” Phiri said. “It’s all politics, but we’ll survive.”

The police spokesperson, James Kadadzera confirmed the transfers in an interview with local media outlet, the Nation, saying they had been made to meet needs in other police departments.

‘‘I can confirm that a number of security detail have been transferred from the vice-president’s office. This is responding to exigencies of work.’‘

Under the President’s (Salaries and Benefits) Act, the vice president is entitled to, among other benefits, one personal bodyguard, one head of security guard, six security guards, two chauffeurs, two cooks and personal assistants.