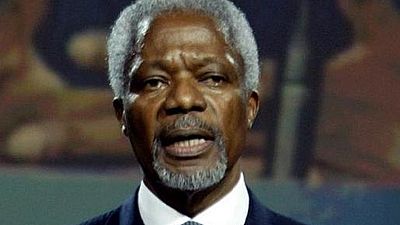 Annan, of Ghanaian nationality, died in hospital in Bern, Switzerland, in the early hours of Saturday, two close associates of Annan said.

In Geneva, the Kofi Annan Foundation announced his peaceful death with “immense sadness” after a short illness, saying he was surrounded in his last days by his second wife Nane and children Ama, Kojo and Nina.

In many ways, Kofi Annan was the United Nations. He rose through the ranks to lead the organization into the new millennium with matchless dignity and determination.

‘Annan was the United Nations’

Annan served two terms as U.N. Secretary-General in New York from 1997-2006 and retired in Geneva and later lived in a Swiss village in the nearby countryside.

“In many ways, Kofi Annan was the United Nations. He rose through the ranks to lead the organization into the new millennium with matchless dignity and determination,” U.N. Secretary-General Antonio Guterres, whom Annan had chosen to head the U.N. refugee agency, said in a statement.

As head of U.N. peacekeeping operations, Annan was criticised for the world body’s failure to halt the genocide in Rwanda in the 1990s.

“The U.N. can be improved, it is not perfect but if it didn’t exist you would have to create it,” he told the BBC’s Hard Talk during an interview for his 80th birthday last April, recorded at the Geneva Graduate Institute where he had studied

Born in Kumasi, Ghana, on April 8, 1938, Kofi Atta Annan served as the 7th Secretary-General of the United Nations from January 1997 to December 2006.

He was awarded the prestigious Nobel Peace Prize in 2001. The award was jointly received with the United Nations.

Anan was the founder and chairman of the Kofi Annan Foundation, as well as chairman of The Elders, an international organization founded by Nelson Mandela.

“Kofi Annan was a guiding force for good. It is with profound sadness that I learned of his passing.” – antonioguterres

An African hero has passed on.

He was truly a rare gem with regards to Peace building in Africa and the world in general.
Africa needs more men like Kofi Annan.