It might seem like a scene out of the movies, but this is the real deal.. French tightrope walker, Tatiana-Mosio Bonogonga completed a stunt on a cord hanging 35 metres from the ground at Paris’ picturesque Montmartre hill on Saturday.

With heads tilted into the sky, hundreds of spectators watched as Bongonga walked on the rope suspended by a crane on the base of the hill’s steps towards the Sacre Coeur basilica.

“There’s always something that is unique to each passage because each one takes place in a different place. Here, I had the chance to face a monument, which had never happened to me before. It was something new, and it was magical to be in front of the Sacre Coeur and to tell myself, ‘I’m coming.’ It wasn’t nothing.” , Bongonga said.

Here, I had the chance to face a monument, which had never happened to me before. It was something new, and it was magical to be in front of the Sacre Coeur and to tell myself.

Many audience members found the show nerve-wracking, as Bongonga completed the performance with no security cable attached to her costume.

“It very surprising and very dangerous. It really impressed me actually. I noticed that she was not secured (with a cable). There was a lot of acrobatics. I had a really good time’‘, Parisian spectator Jennifer Mandelabaum remarked.

For German tourist Sabine Grube the stunt was pretty scary, she admitted it was spectacular.

“First of all, we were very scared because we thought she would like to have some kind of security, and this was not the case. And therefore, we were just a little bit afraid. Also, my children were afraid, but nothing happened. But it was a great, great show”, Grube said.

Bongonga, who prepared for the show for one year, said it was her first time performing in front of a world-renowned monument.

Walking on a tightrope since the age of eight, she said the experience was “magical.” The show also featured music from the Paris Orchestra Chamber. 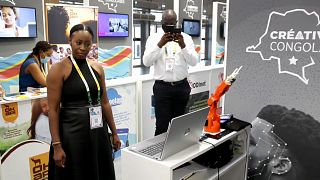