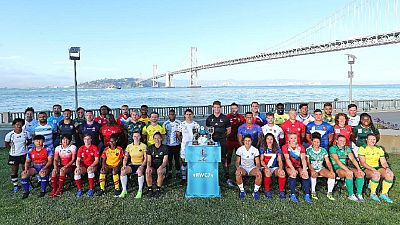 The final squads have been confirmed by all 40 teams ahead of the hotly anticipated Rugby World Cup Sevens 2018, which kicks off on Friday at the AT&T Park in San Francisco, USA, where over 95,000 fans are expected through the turnstiles over three days of action.

As reigning champions in both the men’s and women’s events New Zealand have named strong squads for San Francisco. The women’s team will be looking to the inspirational Portia Woodman to continue her unstoppable form from the HSBC Women’s World Rugby Sevens Series where she led the scoring charts with 43 tries and 215 points overall in the 2018 season.

In the men’s competition, hosts the United States welcome back speedster Perry Baker who amassed 37 tries during the HSBC World Rugby Sevens Series before missing the last two legs through injury and will form an exciting attacking partnership with dangerman Carlin Isles, who was the top try scorer for the 2018 season with 49 tries.

Rugby World Cup Sevens 2018 represents the third edition of the women’s competition and the seventh of the men’s, which was first held at Murrayfield, Scotland, in 1993.

Retired Fijian legend Waisale Serevi is the only player to have appeared in four Rugby World Cup Sevens tournaments and he is also the record points scorer with 297 points to his name.

The action gets underway at 10:00 local time on Friday 20 July (GMT-7) with Fiji taking on Spain in the women’s competition. The men’s tournament also kicks off on day one with Kenya facing Tonga in the first game of the preliminary round at 13:01 local time (GMT -7).