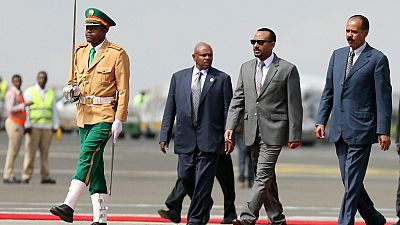 Ethiopia’s Prime Minister Abiy Ahmed and Eritrean President Isaias Afwerki preached love and unity on Sunday at a concert attended by thousands of flag-waving guests, part of a rapprochement between the two nations after years of hostility.

Isaias arrived in Ethiopia on Saturday for a three-day visit, a week after Abiy visited Eritrea. The Horn of Africa neighbours declared on Monday that their “state of war” over after two decades.

As they entered the entered the Millennium Hall on Sunday evening, Abiy and Isaias held hands and waved at the crowd, prompting loud cheers. Musicians performed under giant portraits of the two men.

We have chosen to tread a path and work together for development, prosperity and peace, having overcome a conspiracy of hatred, revenge and destruction.

“We have chosen to tread a path and work together for development, prosperity and peace, having overcome a conspiracy of hatred, revenge and destruction,” Isaias told the audience, which included Ethiopian celebrities.

Eritrea formally seceded from Ethiopia in 1993 after a long battle for independence, but the two went to war in 1998 over a border dispute. Though a peace deal was signed two years later, Ethiopia refused to implement it, saying it wanted more talks.

Reconciliation between Ethiopia and Eritrea could change the politics and security situation of the volatile Horn of Africa region, which hundreds of thousands of young people have fled seeking safety and opportunities in Europe.

Last week, government spokesman Ahmed Shide said landlocked Ethiopia wants to make the reopening of two critical roads leading to the Red Sea ports of Assab in Eritrea’s south and Massawa in the north a priority.

Both countries are hoping for a lucrative peace dividend after years of hostility.

“Forgiveness frees the consciousness. When we say we have reconciled, we mean we have chosen a path of forgiveness and love,” Abiy told concertgoers.

“When I spoke with Isaias, I told him that there may not be enough hotels as Ethiopians visit Massawa and Asmara. He said he would leave his house for them and stay in balconies.”

Abiy and Isaias hugged. An emotional Isaias had both his hands rested on his heart as he waved the guests goodbye.

Earlier on Sunday in the southern town of Hawassa, Abiy hosted Isaias over a ‘cheko’ and ‘genfo’ breakfast — traditional cuisine of the Oromo ethnic group that Abiy hails from. He was also handed a horse and a camel as gifts — national symbols in the two countries.

Isaias had toured an industry park in the town that exports clothing and bags on Saturday.

In concrete signs of rapprochement, the two countries have agreed to open embassies, develop ports and resume flights.

Eritrea will reopen its embassy in Addis Ababa on Monday for the first time since 1998.