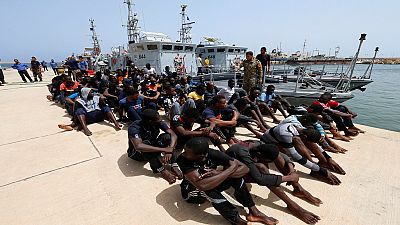 Eight migrants including six children were found dead on Monday after suffocating from petrol fumes while packed into a lorry container on the west Libyan coast, authorities said.

Another 90 migrants recovered from the container were in critical condition and had been taken to a local hospital for treatment, the security directorate in the town of Zuwara said in a statement.

Zuwara is one of the points along Libya’s western coastline where smugglers and traffickers hold migrants before putting them on boats to try to cross to Europe.

The migrants were from various sub-Saharan African and Arab countries, as well as Pakistan and Bangladesh, the statement said. They had been shut inside a refrigerated container designed for transporting meat or fish which was found just outside Zuwara, close to the Mellitah oil and gas complex.

“As a result of the length of time they were suffocated, eight of them died including six children, one woman and a young man,” the security directorate said, adding that gallons of petrol had been found in the container.

It posted pictures of at least nine plastic jerry cans inside the container, as well as a pile of life-jackets apparently intended for use in a boat crossing.

Daytime temperatures in northwest Libya have been in the mid to high 30s Celsius in recent days.

Smugglers and traffickers took advantage of Libya’s lawlessness to send hundreds of thousands of migrants to Italy over the past four years, though flows have slowed since last summer due to an Italian-backed crackdown on smuggling networks.