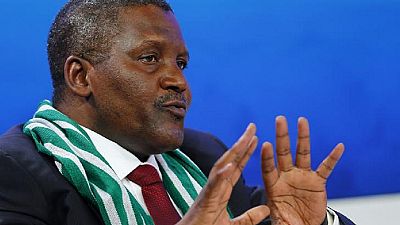 Social media users are reacting to a wide ranging interview that Africa’s richest man, Aliko Dangote gave to the Financial Times, in which he shared the vision of a $12 billion oil refinery he is building, his ambitions to buy Arsenal and why he is considering taking on a new wife.

With a fortune estimated at $14.1 billion, the CEO of the Dangote group which has significant business interests in cement production across Africa and agriculture back home is ranked the 100th richest person in the world by Forbes.

A wife for Africa’s richest man?

In the interview with the Financial Times Africa editor, David Pilling, 61 year old Dangote who is twice divorced and has three grown up children intimated that he might need to take a new wife to help him ‘calm down’.

“I’m not getting younger. Sixty years is no joke,” Dangote told the Financial Times, “but it doesn’t make sense to go out and get somebody if you don’t have the time.’‘

If Dangote decides to send few millions to your account just so he can marry your girl, will you let her marry him?

At lunch today, I heard Dangote is looking for wife to marry and someone was asking if we would take the opportunity & then say Yes.

Which kind life be this nah, since this man called Aliko Dangote announces he needs a wife, my babe just dey do me anyhow. She’s not even romantic anymore. D babe dey even tel me sey that man Dangote is handsome. Can u imagine a 65 yrs old handsome man? Issokay.

Other users have reacted with anger at the dominant media coverage of Dangote’s need for a wife over other issues covered in the interview including his sponsorship of former Nigerian president Olusegun Obasanjo’s presidential campaign and the subsequent limitation of cement imports that have benefitted Dangote Cement at the expense of the Nigerian citizens.

He Mussed the part where he was supposed to give details on How He single Handedly sponsored OBJ 2nd term Election Bid .OBJ then recriprocrate the favour by restricting cement import to His gain.Think. https://t.co/6R1Ego7N1X

In the same interview, Dangote who is racing to finish a a 650,000-barrel-a-day oil refinery near Lagos, said on completion of his several ambitious projects, he intends to reward himself by purchasing his favorite football club, Arsenal.

‘‘I love Arsenal and I will definitely go for it,’‘ Dangote said, adding that he deems the club to be worth about $2 billion.

I will switch to Arsenal the moment Dangote takes it officially.

Dangote will not buy my Arsenal in Jesus name.

Dangote is not the only influential Arsenal fan in Africa. Rwanda’s president, Paul Kagame, who is an ardent fan of the English club, was recently criticised by European lawmakers after the country’s development board paid $40 million to become Arsenal’s shirt sleeve sponsor.