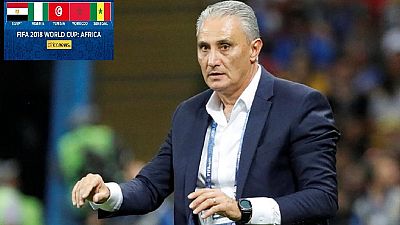 Brazil’s exit to Belgium in the World Cup quarter-finals will mean a Should-I-Stay-or-Should-I-go decision for coach Tite but if he decides to have another tilt at the trophy he is well served for Qatar 2022.

Belgium were lucky to squeeze past Brazil 2-1 in a thrilling match in Kazan on Friday.

The Belgians led 2-0 at half time but Brazil were by far the better team in the second half and in addition to their goal from Renato Augusto with 14 minutes remaining they hit the woodwork and forced Thibaut Courtois into several excellent saves.

I am saying absolutely nothing about my future. This is an emotional moment.

Tite, whose customary calm barely masked what he called “a bitterness” over the setback said it was too early to make a decision on his future.

“I am saying absolutely nothing about my future,” he told reporters. ‘This is an emotional moment.”

Tite has impressed the world as one of the most assured and measured coaches at this World Cup and he will surely be in demand.

While most coaches and players resort to the same old cliches, Tite has taken time to smile, joke and most importantly explain his concepts and ideas to the media.

And although much of his chat can sound like it came from a self-help manual, his candour and openness has endeared him to fans and media alike.

His team’s performances, moreover, always looking to play attacking and positive football, can only have upped his value.

The early money is on Tite remaining in his post and if he does decide to stay he will not have to totally rebuild Brazil because several members of his squad are young enough to make it to Qatar.

Neymar, Phillipe Coutinho, Roberto Firmino and Casemiro are still only 26 and Douglas Costa, the winger who made such a difference when he came on against Belgium, is only a year older.

Centre forward Gabriel Jesus is 21 and Marquinhos, the central defender who was cruelly dropped after being a mainstay under the manager for most of the qualifiers, is just 24.

And this being Brazil there is always talent coming through. Midfielder Arthur, 21, has just signed for Barcelona.

Luan, his team mate at Gremio, won the player of the tournament when they won the Copa Libertadores last year.

And two of the most sensational talents are still only 17.

Vinicius Junior joined Real Madrid last year for a reported fee of 46 million Euros and Rodrygo, the latest in a long line of wonderkids from Santos, is expected to head to one of Europe’s big clubs sooner rather than later.