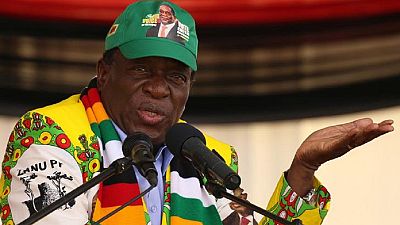 Zimbabwean President Emmerson Mnangagwa’s bid to seal his position in a July 30 election is meant to mark a break with Robert Mugabe’s violence-tainted rule. But massacres that took place decades ago are coming back to haunt him.

Mnangagwa, a longtime Mugabe lieutenant who took over after a coup last year, narrowly avoided a grenade attack last month which wounded one of his vice presidents and a minister at a rally in Bulawayo.

Mnangagwa was in charge of national security at the time of the 1982-87 assault in Matabeleland, and analysts said the Bulawayo rally blast could have been calculated to implicate Mnangagwa’s Ndebele opponents and stir up trouble.

Mnangagwa is the face of Gukurahundi, he can’t deny that. Mugabe was the body but Emmerson is the face.

He was quick to absolve the locals of any blame, pointing a finger at disgruntled Mugabe loyalists instead, but the location was significant: rights groups say army offensives in the area in the 1980s killed 20,000 people and memories remain raw.

Asked whether Bulawayo people were responsible for the blast, Mnangagwa told state television: “The people of Bulawayo? No. They love me. (It’s) people outside Bulawayo.”

That helped ease worries of a security crackdown.

But voters in Bulawayo remain distrustful of their new leader, who is known by his nickname “Ngwena”, Shona for crocodile, an animal famed and feared in Zimbabwean lore for stealth and ruthlessness. Mnangagwa says he is soft as wool.

“It is good that Mnangagwa realises that people in Bulawayo are peaceful and will not use violence. I hope the government will not use this terrorist act as an excuse to target those who oppose this regime,” said Thamsanqa Dube, a 36-year-old resident of Emganwini suburb in Bulawayo.

He says he was rounded up by Fifth Brigade soldiers in Bubi and airlifted to Tsholotsho, 200 km (124 miles) away, where he was tortured for days and saw bodies being dumped in a huge pit.

On the final day, together with six other men, he was lined up naked for execution by firing squad. The last thing Khabo remembers is staring at the barrel of a gun and then waking up in a hospital three days later. He had been shot but survived.

“I cannot vote for him,” said Khabo, fighting tears and pointing to a scar on his left cheek where a bullet entered and exited below the ear.

The army massacres, known as ‘Gukurahundi’, Shona name for ‘early rain that washes away the chaff’, are a major reason Matabeleland’s voters have rejected Mnangagwa’s ZANU-PF party in national elections since 2000. Many of them want an apology.

Mnangagwa’s role during Gukurahundi is not clear; his critics say that at the time, his security ministry passed on intelligence used by soldiers to target victims; officials did not respond to requests for comment.

Despite all attempts to dissociate with the past Mugabe regime, to some Mnangagwa remains defined by his role during Gukurahundi.

“Mnangagwa is the face of Gukurahundi, he can’t deny that. Mugabe was the body but Emmerson is the face,” said Mbuso Fuzwayo, secretary of a Bulawayo-based group that seeks to preserve sites where massacres occurred. The group is called Ibetshu Likazulu, Ndebele for “Last Hope”.

Mugabe has called Gukurahundi a “moment of madness”.

Asked about it at the Davos meeting of world leaders in January, Mnangagwa said: “What has happened has happened. What can we do about the past?

“Wherever wrong was committed, the government of the day must apologise. Wherever any community has suffered any injury, if it is that injury that has to be repaired, we do it.”

At two consecutive rallies in Gwanda town and Bulawayo on June 22 and 23, Mnangagwa did not mention the army crackdown. He instead cast himself as a reformer, promising to devolve more power and bring economic development to the region.

Although he is front-runner in next month’s polls, he faces a substantial challenge from 40-year-old Nelson Chamisa, leader of the opposition Movement for Democratic Change.

With no reliable polls, it is not clear whether the area’s 861,701 voters, 15 percent of the national total, will punish Mnangagwa any more than they did Mugabe in the past.

But in an election under international observation for the first time in years, he may need them more than Mugabe did.

That means Mnangagwa could do with the Matabeleland vote to get the 50-plus-one percent required to win the first round.

In the previous election in 2013, Mugabe polled 25 percent of the vote in Bulawayo and 40 percent of the total Matabeleland vote. Political commentator and ZANU-PF critic Ibbo Mandaza said Mnangagwa was unlikely to fare better than Mugabe.

Political analysts also say Mnangagwa lacks Mugabe’s charisma and may struggle to connect with voters, noting he lost to a little known opposition candidate in parliamentary polls in 2000 and 2005.

Mnangagwa, desperate to end Zimbabwe’s isolation by Western powers, has invited foreign observers, absent since 2002, and is not seen relying on the intimidation tactics and violence employed by Mugabe in the past to win the election. The run-up to the polls has been largely peaceful so far.

George Charamba, Mnangagwa’s spokesman, said the promise of more power to provinces was no political gimmick and officials were working to produce a policy on how it would be shared.

“Expectations are that by the time elections are over, the national vision on decentralisation will be presented to the new government as a blueprint for the next five years,” he said.

Devolution was made mandatory in the constitution in 2013, but ZANU-PF governments have resisted its implementation, saying it was costly for the country.

Mnangagwa’s officials declined to comment on how he would deal with Gukurahundi and did not respond to a written request to interview him.

The president’s loyalists say he is a man of his word and point to his launch of a livestock programme that gave villagers thousands of cattle in the cattle ranching in Matabeleland South Province as sign that he cares about their welfare.

Mnangagwa promised to re-open closed industries in Bulawayo and make it Zimbabwe’s industrial hub. A hospital shut in 2004 in Bulawayo would be opened within weeks with help from Indian investors, he said and he also commissioned construction of a stalled $1.5 billion power plant in the western Hwange town, which he said would create 7,000 jobs.