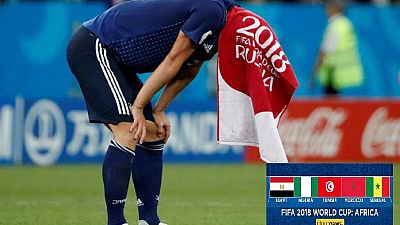 Entertainment, upsets, personalities, controversy and goals, the World Cup showcased it all in the group stages and the drama has been even amplified in the knockout stages.

The group stage of the tournament can risk being a simple process of eliminating the weaker nations and serving as a mere warm-up for the favourites.

The knockout stages have already delivered two penalty shootouts with 2010 world champions Spain losing one to the hosts Russia, while Croatia’s win over Denmark in the other produced five stunning saves from goal keepers Kasper Schmeichel and Danijel Subasic.

While Subasic made three saves out of five to help Croatia win, Schmeichel was equally impressive making two in the shootout in additionj to a Luka Modric penhalty he had saved in extra time.

In the group stages, 122 goals were scored in 48 games, an average of 2.5 goals per match, just below the level for the 2014 tournament as a whole, with just one goalless draw, the tepid final Group C match between France and Denmark.

Amongst those goals there have been some moments of breathtaking brilliance. Lionel Messi’s sublime goal against Nigeria, with the ‘thigh of God’ control, Brazilian Philippe Coutinho’s strike against Switzerland and Luka Modric’s devastating drill into the bottom corner in Croatia’s 3-0 upset of Argentina.

From Portugal there was Ricardo Quaresma’s cheeky outside of his foot ‘trivela’ against Iran and Cristiano Ronaldo’s free kick against Spain in the thrilling 3-3 draw which set the tone for the group stage.

It’s not over until it’s over

There is no better drama in football than late drama. In the group stages, 26 goals were scored after the 80th minute, of which 13, 50 percent, have been winners or equalisers.

Marcos Rojo, the Argentina defender, volleyed home like a world-class striker in the 86th minute against Nigeria, a goal which kept his team in the tournament and sent the Africans out.

Germany’s Toni Kroos kept his side on life-support for a few days after his dramatic late free kick winner against Sweden.

In the knockout stages, Belgium completed a comeback win over Japan, coming from two goals down to score a third and winning goal in stoppage time.

What has helped maintain the combativeness and tension in the group stages has been the strong displays from some of the lower seeds.

South Korea are out but will take some comfort in having beaten the defending champions Germany. Iceland, in their first World Cup, almost made it and will remember how they held Messi and Co to a 1-1 draw.

Nigeria were minutes away from advancing at the expense of Argentina and Senegal were in with a chance until the death. Iran and Morocco showed signs of real progress.

In the knockout stages, the hosts Russia knocked out Spain, while Japan gave Belgium the scare of the world cup leading by two goals to nil in the 52nd minute.

All the action has taken place in stadiums and host cities which, in contrast to some of the pre-tournament expectations, have been welcoming and enjoyable filled with fans from all over the world.

The fears of racial abuse from Russian fans have not materialised nor has there been any hint of hooliganism or violence.

Most of the controversy in the opening two weeks has been related, entirely predictably, to the video assistant referee (VAR) system or more specifically to referees who, despite the chance to see replays in a major tournament for the first time, have still managed to make some mistakes.

But while VAR is no miracle cure for refereeing errors, it has not produced the chaos that some predicted for it’s debut use, even if it has unfortunately incentivised protesting referees decisions.

And while diving remains a problem in the sport, as does playacting, so far there has been a refreshingly low amount of such shenanigans.

Positive football has been to the fore but it remains to be seen if, in the tension and high-stakes of the knockout stage, that remains the case or if negativity and cynicism creep in.

The departure of Germany, Argentina and Portugal has led to an unbalanced draw with the top half packed with favourites, now boasting of just Brazil and Belgium.

That opens up the possibility of a surprise finalist from the bottom half of the draw, where England and Croatia are now relishing the chance of reaching the final.

Spain’s defeat by Russia has further opned up the possibilities for Harry Kane’s England who have to first overcome Colombia on Tuesday, before admiring an ‘easy’ path to the final.

Switzerland, Sweden, Colombia and hosts Russia could not have dreamed of a more realistic route to the big game.