World Cup: Will it be POGtime in the French clash against Messi's Argentina? 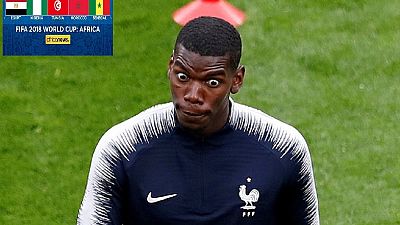 French midfielder Paul Pogba will be carrying Les Bleus’s hopes in a mouth-watering last-16 World Cup clash against Argentina on Saturday, and his fans may be hoping he turns it into “POGtime”.

Criticised for his ever-changing hair-cuts and colours, his huge transfer tag and his self-references, his house is the “POGhouse”, his aquarium the “POGtank”, and so on, Pogba has been feeling the pressure this season.

But he seems to have recovered his joie de vivre since he escaped from the daily routine of Manchester United and Jose Mourinho.

He has the ability to score goals and create them, which he does often. He’s a complete midfielder, he can do everything but he can’t do everything.

After joining the French camp for the World Cup, Pogba looked light-hearted and chatty in his first appearance at a national team news conference.

His undyed, clean-cut hair prompted French federation president Noel Le Graet to say: “I saw this nice boy and I wondered, who is he?”

It was Pogba. Relaxed, smiling.

“I love you so much, I missed you. Really happy to see you all here,” he joked as he got the news conference going.

“I’m with my family here,” he added referring to the French squad.

Pogba had a difficult season at United, amidst rumours that his relationship with manager Jose Mourinho was far from ideal.

“There were little things,” Pogba said.

There were moments when his talent showed through, none more so than his two-goal performance in a comeback derby win over Manchester City at the Etihad Stadium.

But often Pogba looked frustrated, uncomfortable in the role given to him in Mourinho’s conservative system and often the brunt of his manager’s nagging.

That’s not the case with France, however, where under coach Didier Deschamps he clearly feels protected and valued for who he is.

“I’ve got the right to dance. When I dance and we win, there’s no problem,” the 25-year-old said. “If we lose, it becomes a problem.

“They say I’m a showman, but you have to take me as I am. I’ll always smile, whether I’m being criticised or praised.”

With Argentina and then possibly Portugal, Brazil or Belgium to meet on their way to the final, Pogba may have numerous opportunities to prove his worth, on and off the pitch.

The lanky midfielder can become the heir of the likes of Jean Tigana, Patrick Vieira or Emmanuel Petit, and he is ready to give it all.

“I’m ready to give everything for this France team,” he said, taking a selfless approach to his role.

“Can I become the leader of this team? Why not, it’s something that would come naturally. If I bark at a player, it’s for his own good and I know that if someone barks at me, it’s for my own good and ultimately for the sake of the team.”

Of Pogba, Deschamps says: “People talk a lot about Paul. He’s a midfielder, he’s not a number 10, nor a forward.

“He has the ability to score goals and create them, which he does often. He’s a complete midfielder, he can do everything but he can’t do everything. There’s a nuance here.”

If he does everything on Saturday, the French would no doubt be extremely grateful.