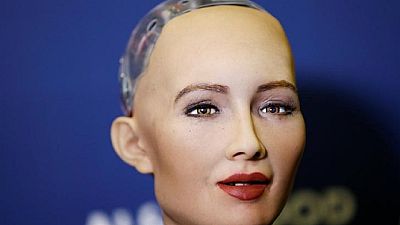 Sophia, the famous artificial intelligence (AI) humanoid robot, arrived in Ethiopia on Friday, but was unable to have a scheduled dinner with the prime minister, Abiy Ahmed, after a bag containing some of her parts went missing at the Frankfurt Airport, en route to Addis Ababa.

Designed by Hong Kong firm Hanson Robotics, Sophia has been programmed to speak Amharic, Ethiopia’s official language, which would be the first language she speaks other than English.

While Sophia missed her diner with Abiy, and a press conference scheduled to take place on Friday at the Ethiopian National Museum, Getahun Mekuria, Ethiopia’s science and technology minister, said Sophia would still appear at Saturday’s MCIT International Expo.

Getnet Asefa, the manager of Icog Labs, the engineering firm behind her Amharic programming, explained that Sophia was fixable and they would find alternative parts for her.

#Ethiopia: #Sophia (Sofia) lost one luggage at Airport_FRA en route to #Ethiopia, Minister of science & technology DrGetahun told BBCAmharuic. It may impact her ?but the tech savvy Ethiopians at iCog_Labs are doing everything they can to fill the gap https://t.co/Ig77Pm9MVI pic.twitter.com/CVEd3LYx7b

Sophia became the first Android citizen in history when she was rewarded Saudi Arabian citizenship.

A Hanson Robotics invention, Sophia is the world’s most advanced android. The ‘realest’ robot to this day, Sophia’s covering artificial skin consists of organic and non-organic material.

The robot is able to express her ‘emotions’ through a number of facial expressions installed via a large number of motors under her ‘skin,’ according to an article by AFP.

To maintain eye contact and ensure the robot is able to recognize human faces, the robot has cameras installed in her eyes and torso.

Sophia has been programmed to carry out non-scripted conversations, during which she is able to collect emotional data and form emotional relations.