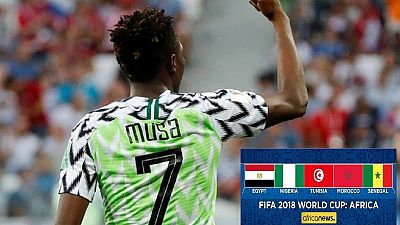 Nigeria’s Ahmed Musa became ‘Lionel Musa’ on social media in Argentina on Friday after his two goals against Iceland which not only put the Africans back on course for a last 16 place, but also restored the World Cup hopes of the South Americans.

However, the Nigerian has warned his new-found hero status in Argentina is likely to end abruptly on Tuesday when the two countries meet in a decisive Group D game in St. Petersburg.

“Whenever I play against Argentina, or whenever (Lionel) Messi is playing against me, I score.’‘

“Four years ago, in Brazil when Messi was playing against me, I scored two goals,” said Musa, referring to the 3-2 win for Argentina over Nigeria in a group game in Porto Alegre where Messi also netted twice.

“When I transferred to Leicester City and we played against Barcelona and Messi was in the pitch too, I scored another two goals, so I think in the next game anything can happen. Possibly, I’m going to score another two goals.”

Musa’s brace for Leicester came in a pre-season friendly in Stockholm shortly after he had signed for the then English champions from CSKA Moscow in 2016.

The 25-year-old is now the first Nigerian to score at different World Cups and with four goals the country’s all-time record scorer in the finals.

“I’m very good at breaking records and I’m happy now to be the top scorer at the World Cup for Nigeria. It’s not easy but I have to thank my coach for his support because if he didn’t believe in me he wouldn’t put me in the pitch.”

Musa was restored to the line-up after Nigeria’s opening Group D loss to Croatia and repaid the faith with two fine individual strikes.

The opening goal just after halftime saw him pluck the ball out of the air with his first touch before blasting it home.

The second came in the 75th minute, when after a break down the wing, Musa cut inside and waltzed around the goalkeeper before patiently firing the ball into the net.

Nigeria’s success also ensured a renewed window of opportunity for Argentina, who were hammered 3-0 by Croatia in Nizhny Novgorod on Thursday, but now have a realistic chance to qualify if they beat the Africans on Tuesday.

“We know the importance of the last game, it’s do-or-die,” added Musa. “We have to win, we can’t afford to lose. By the 95th minute we will know who carries the day and, by the grace of God, we are going to work very hard.”

Nigeria have three points, are second in Group D, behind Croatia who have already qualified after successive victories, but ahead of Argentina and Iceland, both on one.