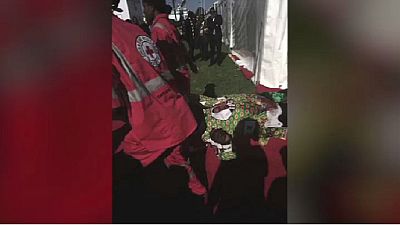 Zimbabwe’s president has visited victims of the explosion that rocked a rally he had just addressed in Bulawayo, the second largest city of the country.

The president, who survived what is thought to have been an assassination attempt on his life has urged the country to ‘remain calm and address our differences peacefully’.

‘‘While we await further information, my thoughts and prayers are with all those affected by this senseless act of violence,’‘ the president said in a tweet after confirming that he had visited some of the victims in the hospital.

While we await further information, my thoughts and prayers are with all those affected by this senseless act of violence. The campaign has been conducted in a free and peaceful environment, and we will not allow this cowardly act to get in our way as we move towards elections.

Footage from Zimbabwe state television showed the explosion took place near Mnangagwa as he waved to supporters. He was later seen in pictures circulating on social media visiting Chiwenga’s wife in hospital.

President Mnangagwa has visited the injured in hospital who include VP Mohadi pic.twitter.com/PZADGvdUL8

The President is taking time with all those that were injured. We have to defend our freedom. The zimbabwe which we all want is free for all to pursue their interests, be it business, political, academic or arts. Bombs and killings are not part of it. pic.twitter.com/uvddVuJgcc

Mnangagwa was speaking at his first rally in Bulawayo, an opposition stronghold where the ruling ZANU-PF has not won in national elections since 2000.

Mnangagwa said last August, when he was still vice president, that he had been poisoned at a rally outside Bulawayo and spent weeks receiving medical treatment in neighbouring South Africa.

In an interview conducted after Saturday’s explosion, Mnangagwa however insisted that he does not believe the people of Bulawayo are behind the attack, ‘they love him as much as he loves them’.

#MnangagwaBomb Zim’s President Mnangagwa on the identity of the people who tried to assassinate him (They are not from Bulawayo) – 23 June 2018 #Mnangagwa #Bulawayo #ZimElections2018 #EmmersonMnangagwa pic.twitter.com/3H7LXQ2rsp

Zimbabwe holds its presidential election on July 30, with 75-year-old Mnangagwa and 40-year-old Nelson Chamisa, the leader of the opposition Movement for Democratic Change, the main contenders.

The vote next month is the first since Robert Mugabe’s downfall after a de facto military coup last November.

Unlike previous elections which were marred by violence, mostly against opposition members by ZANU-PF supporters, the run up to this year’s vote has been relatively peaceful.

Zimbabwe last had blasts at rallies in the 1980s, which had targeted Mugabe.