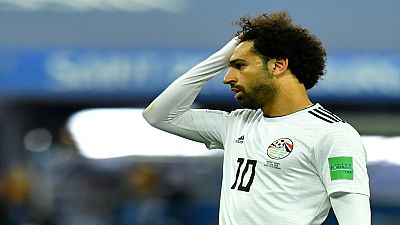 Luis Suarez scored on his 100th international appearance to send Uruguay through to the knockout stage along with hosts Russia as Saudi Arabia and Egypt were eliminated from Group A.

Suarez tapped in midway through the first half after keeper Mohammed Al-Owais failed to grab the ball on a corner. The goal put Uruguay second in Group A with a maximum six points behind hosts Russia.

Saudi Arabia, who have not won a World Cup game since their debut in 1994, have zero points, just like Egypt, who lost 3-1 to Russia on Tuesday.

Depending on the result of their last group game against Russia, Uruguay will take on either Spain, Portugal or Iran, who are still on course in Group B for a place in the quarter-finals.

Egypt has won seven continental championships, including three straight in 2006, 2008 and 2010, but is appearing in just its third World Cup.

This year’s journey started to seriously unwind two minutes into the second half, when Egypt’s captain, Ahmed Fathi, had a Russian cross deflect off his foot and scoot past the helpless Egyptian goalkeeper, Mohamed El-Shenawy, for the first goal of the game.

Uruguay have locked down a spot in the knockouts alongside Russia, which they will face on Monday 25th June at 15:00 GMT for the top spot in Group A.

Saudi Arabia will play Egypt simultaneously, hoping they can give a good account of themselves and leave Russia with their heads held high even after the initial drubbing from the hosts.