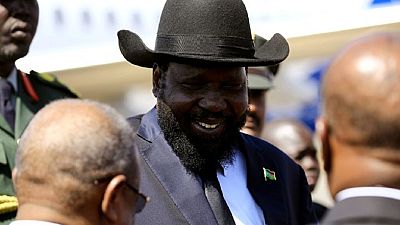 South Sudan President Salva Kiir left the capital on Wednesday and headed to Ethiopia ahead of a planned meeting with his rival and rebel leader Riek Machar ahead of planned talks to try to negotiate an end to a five-year-old civil war, an official said.

“IGAD has decided to call face-to-face dialogue between our president and Riek Machar on outstanding issues,” Awut Deng, a senior member of Kiir’s delegation, said before departing, referring to the regional East African bloc.

“So we expect the face-to-face meeting between our president and Riek Machar will be today as scheduled by IGAD.”

So we expect the face-to-face meeting between our president and Riek Machar will be today as scheduled by IGAD.

Hope for peace in South Sudan

Kiir recently met the Ethiopian prime minister, Abiy Ahmed who is the current chair of IGAD, and the two leaders agreed that a peace deal is viable.

IGAD led talks to revive the 2015 peace deal have stagnated after parties failed to agree on salient issues that could conclusively end the civil war. Kenyan veteran politician, Raila Odingaalso met both Machar and Kiir to facilitate the first face-to-face meeting of the two rivals since July 2016.

Tens of thousands of people have been killed in the civil war that broke out in late 2013 when troops loyal to Machar, the former vice president of South Sudan, launched a rebellion against the government.

All sides in the now complex and multi-faceted war stand accused by the United Nations and other bodies of committing atrocities against civilians.