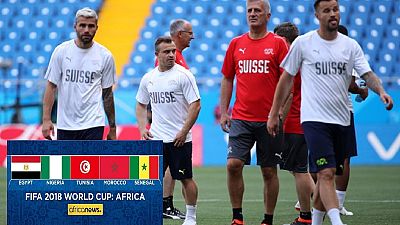 Switzerland coach Vladimir Petkovic said his side must be prepared to win ugly in Sunday’s World Cup Group E opener against the footballing beauty of Brazil and their talented forward line, led by the dazzling Neymar.

It is a similar record to five-times winners Brazil, who have won 17 of their 21 games under forward-thinking coach Tite and are one of the favourites to lift the trophy.

We’re not here to make a lovely match but to win it.

“We’re not here to make a lovely match but to win it,” Petkovic told a news conference on Friday in the Rostov Arena.

“We’ll try to be as organised as possible, you need to provoke a team like Brazil into making mistakes so you can create opportunities, that’s the mentality you need to have because we’ll need to score one or two goals to win the game.”

Captain Stephan Lichtsteiner has come up against Brazil’s talisman Neymar while playing for Juventus when the forward was at Barcelona and he said it was not feasible to only focus on keeping the world’s most expensive player at bay.

“It’s practically impossible to completely neutralise Neymar for 90 minutes, he’s the most complete player in that position in the world,” said Lichtsteiner, who recently signed for Premier League side Arsenal.

“We need to use our strength, use our full backs as wingers, we need to close the gaps in front of other players when we confront individual players of that level.”

Petkovic took over as Switzerland coach after the last World Cup, taking the team to the second round at Euro 2016, where they fell to Poland on penalties although his side’s recent resilience has seen them climb up to an impressive sixth in the FIFA world rankings.

The coach remarked on the sweltering heat in Rostov-on-Don, where temperatures hit a peak 32 degrees Celsius while his side were training, a contrast to the mild conditions at the team’s base in Togliatti, near the host city of Samara, where it has not been hotter than 19 degrees.