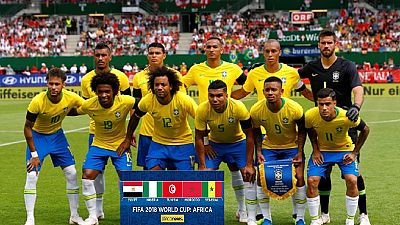 Five time world champions Brazil wrapped up their preparations for the World Cup with an impressive 3-0 win against Austria in Vienna.

The South American nation unleashed their full attacking might against Austria on Sunday as the feared quartet of Neymar, Willian, Philippe Coutinho and Gabriel Jesus start together for the first time.

And as fate would have it, Neymar, who was starting a game for the first time since he fractured a metatarsal and sprained his ankle playing in February, was on the scoresheet yet again.

His fellow attackers Gabriel Jesus and Coutinho also scored in a match where Brazil dominated Austria that has been on an eight match unbeaten streak.

Brazil’s starting 11 for the World Cup?

Brazil’s coach had earlier said that Sunday’s performance would inform the selection of a starting lineup for the World Cup tournament in Russia.

“I don’t know if I can say that this will be the team at the start of the World Cup,” he told reporters. “The match (against Austria) and the performance will decide that.”

Brazil have lost only one game out of 20 since Tite was appointed in June 2016 and have regained their confidence which was shattered by the 7-1 semi-final defeat to Germany at the last World Cup.

Tite’s men will open their World Cup campaign against Switzerland on June 17 before taking on Costa Rica and Serbia.