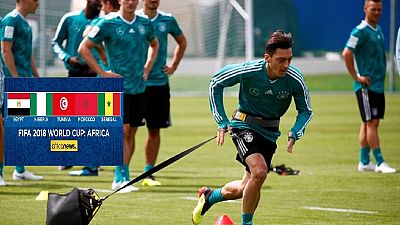 Germany midfielder Mesut Ozil has fully recovered from a minor knee injury in their penultimate warm-up match and is fit to play in their World Cup opener against Mexico on Sunday, coach Joachim Loew said on Saturday.

Ozil picked up a knock in the 2-1 loss to Austria on June 2 and had to miss their last friendly against Saudi Arabia six days later.

The 2014 World Cup winner, who has played in every single match Germany have contested in their last two World Cups, had also suffered a back injury in May that had kept him out for weeks, putting his fitness for the tournament in Russia in doubt.

All players are fit. Mesut Ozil this week completed two additional training sessions and can play.

“All players are fit. Mesut Ozil this week completed two additional training sessions and can play,” Loew said. “But I will discuss the final line-up with the team this evening. There are two, three ideas in my head for the line-up.”

Apart from his injuries, Ozil also had to deal with a massive fallout from photos taken with him and Germany team mate Ilkay Gundogan with Turkish President Tayyip Erdogan last month.

The two players of Turkish descent were jeered by German fans in their final warm-up games as the affair overshadowed their run-up to the tournament, with many supporters calling for the pair to be thrown out of the team.

German lawmakers across the political spectrum and the country’s football federation argued that Erdogan does not sufficiently respect German values.

“A lot has been written about Mesut (and his mood),” team mate Julian Draxler, who could play alongside him in midfield against Mexico, said on Saturday.

SUGGESTED READING: Guide to Africa’s World Cup, will an African team go all the way in Russia?

Questions regarding Ozil’s mood are nothing new with the player often criticised for his body language during matches.

“But that is not all true. He is in good spirits, makes jokes. The mood is good and he cannot wait for the tournament to start.”

“This discussion has been going on for a few years. He has skills not many possess and he is our most creative player,” Draxler said. “He will be there when needed and will play a good tournament.”