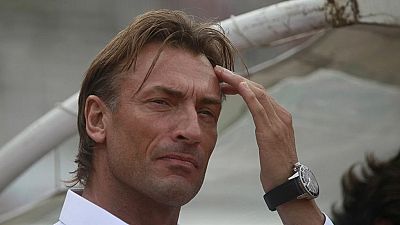 Morocco coach Herve Renard is confident he has done his homework on Group B opponents Iran and that his lack of World Cup experience will not count against him when the teams meet in their opening match on Friday.

Iran are coached by wily Portuguese Carlos Queiroz, who is making his second consecutive World Cup appearance with Iran and has also coached South Africa and Portugal at the tournament.

In contrast, Frenchman Renard is making his first appearance as a World Cup coach, although he has plenty of tournament experience from his time managing teams in Africa.

We have a coach tomorrow who will play his fourth World Cup,” Renard told a news conference on Thursday. “I’m here for the first time, I’m a beginner.

“We have a coach tomorrow who will play his fourth World Cup,” Renard told a news conference on Thursday. “I’m here for the first time, I’m a beginner.

“But we are not here to take pictures of the monuments in St Petersburg. We are here to compete. Mr Queiroz is always full of surprises, but since the draw we have given a lot of thought to the Iran team.”

With several Iran players based in lesser-known leagues, Queiroz had talked up his team’s chances of surprising their Group B opponents, who also include European champions Portugal and 2010 World Cup winners Spain.

Renard said Morocco’s coaching staff had taken a keen interest in Iran and would be prepared for any surprises the Portuguese might have up his sleeve.

“We’ve been working and observing for over six months, we’ve been deciphering all their matches for the last two years,” he added.

“For us it’s rather simple. We have three teams which in the FIFA rankings are all above us. They are superior to us and we’ve prepared for Iran like we have prepared for Spain and Portugal.

“This particular match is not more or less important.”

Ranked 37th, Iran are four places above Morocco in the FIFA world rankings, with Spain 10th place and Portugal fourth, and Renard said mental toughness would play a vital role in Friday’s match.

“Tomorrow we will see who is mentally fit, who is relaxed and serious at the same time and that team will win the game,” he added.

The 49-year-old also denied that Spain losing coach Julen Lopetegui on the eve of the tournament had made it easier for the other teams in the group.

Lopetegui was sacked on Wednesday after Spain’s soccer federation said he had failed to inform them he had agreed to take over as Real Madrid manager after the World Cup.

“When you have as much talent as the Spain national team has, it may cause a little bit of trouble but you need much more than that to destabilise Spain,” Renard said.