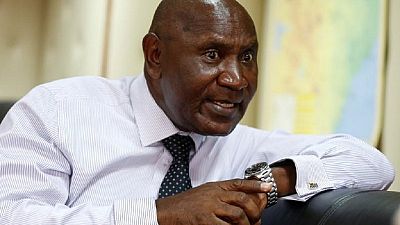 High-level corruption across all levels of government in Kenya threatens the integrity and basic functioning of the state, the auditor general told Reuters on Thursday.

Kenyan media have reported on dozens of graft scandals involving public officers conspiring to steal from state coffers since President Uhuru Kenyatta took office in 2013. Some officials have been tried, but none have been convicted.

“If we don’t watch out, it will engulf us,” Edward Ouko told Reuters in an interview, describing the level of graft as shocking.

If we don’t watch out, it will engulf us.

His audits suggest that collusion by civil servants and other officials to steal billions of Kenyan shillings annually is coordinated at a high level, he said.

Ouko, an accountant appointed in 2011, said that overhauling a Byzantine procurement and payments system that is easily tampered with is central to halting the looting.

The mandate of his office is to promote accountability and transparency in the public sector.

He expressed frustration that the recommendations he made in 2014 for reforming that system were ignored by parliament and never implemented.

“It makes me angry that the weaknesses which we had revealed about IFMIS’ potential abuses were not acted upon,” Ouko said, using the acronym for the government’s payments system, the Integrated Management Information System.

Kenya is currently being roiled by a new spate of scandals involving bogus tenders and suppliers that allegedly resulted in the theft of hundreds of millions of shillings by state officials from several government bodies.

Dozens of officials and business people are in custody over theft at one agency, the National Youth Service, which aims to train young people and help create jobs.

The auditor said he produced a report for parliament on a scandal that emerged at the same agency in 2015 in which he documented how roughly 1.6 billion shillings ($16 million) “had gone out of the window” and named officials and companies involved in the phoney contracts.

Parliament studied the report for months but to his knowledge no action was taken to tackle what Ouko identified as the enabler of the theft: faulty procurement and payments systems.

“My report was completely ignored”, he said.

Nearly two dozen officials were ultimately tried over the alleged theft of a fraction of the total documented by the auditor. All were acquitted earlier this year.

Kenyatta, who was elected for a second term after a protracted elections season last year in which more than 100 people were killed by police during protests, has spoken out recently against graft and urged the judiciary “to ensure fair trials and justice”.

He expressed scepticism, however, that the various institutions involved in the investigation and prosecution of corruption-related crimes would achieve justice or reform the system.

He said this was because some of the institutions, such as the Ethics and Anti-Corruption Commission, are poorly run with too wide a remit to operate effectively and also because of threats from vested interests.

In 2014, Ouko said, lawmakers launched an investigation into him that led to allegations of procurement fraud when he introduced software that allowed his office to track suspect transactions through IFMIS.

“The intention was to remove me”, he said, explaining that the investigation highlighted the resistance to change from some camps.