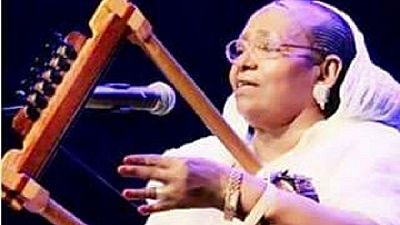 Eritrea on Friday laid to rest Tsehaytu Berakhi, the woman known as Mother of Eritrean soul music. She was buried at the St; Mary’s Cemetery in the capital, Asmara.

Berakhi died in exile in the Netherlands at the age of 79. Information Minister Yemane Meskel described her as “ Eritrea’s iconic/pioneer singer and guitarist known for her folk and patriotic songs.”

She is regarded as a trailblazer for female musicians in the Horn of Africa region – having used her position to challenge the conservative outlook of society in the 1960s.

According to music pundits, at the continental level, she ranks along with the likes of pioneers such as South Africa’s Miriam Makeba and Tanzania’s Bi Kidude.

“Dubbed the “Sunshine of Eritrea”, she sang in Tigrinya and was a renowned player of the kirar, a bowl-shaped lyre. She started her career aged eight, playing in local bars,” the BBC Africa LIVE page said about her whiles announcing her death.

Not only did she sing, she was also a songwriter and dancer. At the time of her demise she had a number of albums to her credit. The main theme that run across them were love and politics – especially during the height of the Eritrean struggle for liberation.

Some of her memorable hits include Mejemerya Fikri and Abashawel.