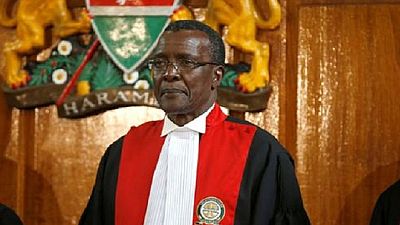 Kenya’s Chief Justice David Maraga says he is bent on keeping his anti-corruption pledge to the nation as head of the judiciary.

His comments was contained in a tweet he posted on Thursday morning, barely 24-hours after a High Court detained over 20 persons in connection with the latest corruption scandal in the country.

“I give my assurance to the nation that the Judiciary will, as always, discharge its mandate in the fight against corruption in accordance with the dictates of the Constitution, rule of law and justice,” his tweet read.

It was accompanied by two black and white photos: a portrait of himself and a group photo with the main political actors of the 2017 general elections. He was standing at the far right of a photo that included President Uhuru Kenyatta and his deputy William Ruto.

The remaining persons are Former Prime Minister and veteran opposition leader Raila Odinga and the other three co-principals of the opposition coalition National Super Alliance (NASA) are also in the shot.

The country’s public prosecutor on Wednesday secured a court order that some 24 civil servants and business people charged with involvement in the theft of nearly $100 million of public funds be kept in custody pending a June 4 hearing on their application for bail.

.ODPP_KE opposes bail application by the accused persons in sh 8 billion #NYSscandal. Accused to be remanded in custody until Monday 4th June, 2018 when court will rule on their bail application #AntiCorruption_ODPP pic.twitter.com/6xsFAk1gK2

Even though chief prosecutor Noordin Mohamed Haji had on Monday named 54 people in connection with the scandal, only 24 were in court because some of those charged remain at large.

The prosecutor’s office further disclosed that it had applied for arrest warrants for suspects who failed to turn up in court or to hand themselves in to the police earlier this week.

The suspects are primarily facing charges that relate to theft at the government’s National Youth Service (NYS). They all pleaded not guilty on Tuesday to magistrate Douglas Ogoti.‏

Forty of the accused are government officials, whose charges also include abuse of office and conspiracy to commit an economic crime.

The NYS is a state agency that trains young people and deploys them to work on projects ranging from construction to traffic control.

It is rare for prosecutors to bring such a large group of public officials to court to answer corruption charges in a country where corruption is said to be rife and people continue getting away with impunity.

I give my assurance to the nation that the Judiciary will, as always, discharge its mandate in the fight against corruption in accordance with the dictates of the Constitution, rule of law and justice. pic.twitter.com/oPnYYT37Jn