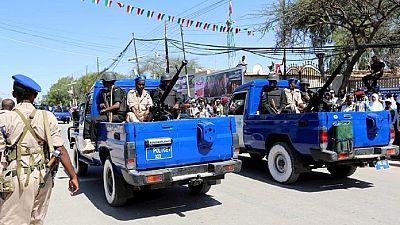 Police in Somalia’s breakaway Somaliland region arrested more than 40 protesters and two journalists at a demonstration in a town whose ownership is disputed by a neighbouring region, a police officer said.

Protesters marched through the town of Las Anod on Monday, shouting in support of rejoining the federal government, based in Mogadishu, residents said.

“We arrested 47 demonstrators including women and youth who were misled,” Abdirisak Mohamed Faarah, police commander for Somaliland’s Sool region, said at a news conference in Las Anod on Monday.

We arrested them because they were destabilising peace and we shall take measures against those who masterminded it.

‘‘There are also two reporters in jail for creating chaos. We are also looking for others and we shall arrest them. We arrested them because they were destabilising peace and we shall take measures against those who masterminded it.’‘

The fighting appeared to be a resumption of more than 10 years of periodic conflict between Puntland and Somaliland over the disputed region of Sool.

A week earlier, clashes between the two sides over the ownership of Tukaraq village, taken by Somaliland last month, killed at least 45 people. Forces from Puntland and Somaliland remain stationed on opposite sides of Tukaraq.

“We shall continue fighting till we liberate Las Anod town. We urge Somaliland to stop suppressing the residents,” Abdihakim Abdullahi, deputy president of Puntland, told Reuters on Monday.

Other Somaliland officials could not be reached for comment.