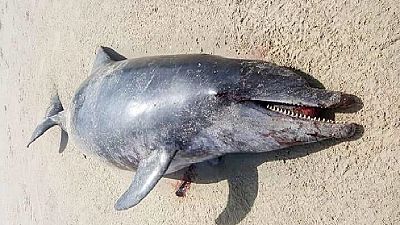 A dead dolphin found on the shores of Gambia’s Gungur beach has reignited talk of deadly pollution blamed on a Chinese fish processing company.

Residents and activists have linked the incident to the operations of the Golden Lead company activities. The company has severally been blamed for polluting Gambian waters.

Through the better part of 2017, the company was accused of disposing off suspected toxic waste into the sea via pipes, resulting in the washing ashore of dead fish along the coastline.

There has yet to be an official explanation from relevant authorities or from Golden Lead. The activities of Golden Lead recently led to a protest by young people in the country. The police arrested three of them but they have so far been released.

Gambia, referred to as the Smiling Coast of Africa, uses its coastline as one of the country’s biggest foreign exchange earners. Tourists have often flocked The Gambia to spend their holidays.

In June last year, Golden Lead agreed to an out of court settlement over the pollution and were to pay a bond of 25,000 US dollars, take immediate measures to treat its wastewater and pay for testing of already contaminated water.

The company was equally accused of withholding information about their waste management and not keeping track of its activities along Gambia’s coast.

“They were supposed to have a waste treatment plant in sea too on the factory itself. So that they treat their wastewater and then they apply for a discharge permit.

“So that we are able to conduct a water quality analyses test to ensure that we establish that the wastewater that they discharge into the water body is not going to cause any harm.

“But then, unfortunately they did not do or they are yet to install that water treatment plant,” said Lamin Samateh, senior environmental inspector at the National Environmental Agency, NEA.