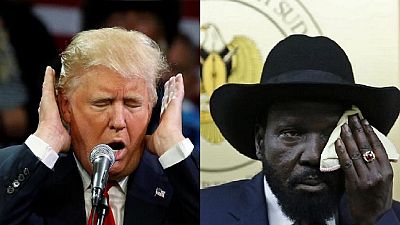 The United States will review assistance programs to South Sudan, the White House said on Tuesday, the main reason for the move being frustration with the lack of progress in reaching a peace agreement to end the violence in the country.

“We are deeply frustrated with the lack of progress toward an agreement, and we must ensure our shared efforts reflect the urgency of the situation,” the White House said in a statement.

“Today, the United States will initiate a comprehensive review of its assistance programs to South Sudan,” the statement added.

We are deeply frustrated with the lack of progress toward an agreement, and we must ensure our shared efforts reflect the urgency of the situation

South Sudan, Africa’s youngest nation is of importance to the United States. The U.S. have been at the forefront of calls for a resolution to fighting between the government and armed opposition groups.

South Sudan suffers from insecurity which has resulted in a humanitarian crisis. Thousands have been internally displaced whiles hundreds continue to flee into neighbouring Ethiopia and Uganda.

Hundreds have died in the civil war that broke out due to political disagreements between President Kiir and his former vice-president Reik Machar. Machar is currently in exile even though Kiir has recently called for his return stressing that he was ready to guarantee his safety.

The country was on the list of U.S. envoy to the United Nations, Nikki Haley’s Africa trip in October 2017 on the instructions of President Donald Trump. Her first stop was in Ethiopia before South Sudan and the Democratic Republic of Congo.

Months later, Haley told the U.N. Security Council that president Salva Kiir was unfit to rule having failed to end violence in the country. “The time has come to acknowledge the hard reality – that the leaders of South Sudan are not just failing their people, they are betraying them,” Haley told a council meeting in January.

A government spokesman dismissed her claims stating: “It is not the business of Nikki Haley to say President Kiir is unfit or fit to rule South Sudan. This is the business of South Sudanese people and they are the ones to decide, but not Haley,” Ateny Wek Ateny, Kiir’s spokesman said.