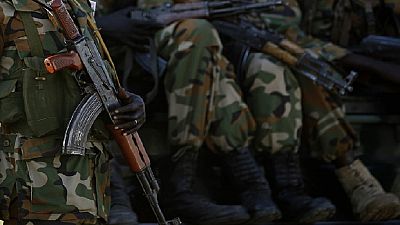 Armed men believed to be separatists forced Cameroonian security forces to retreat when the two engaged in exchange of fire on Wednesday in the restive northwest region.

According to the BBC Africa Live page, the military was forced to withdraw from the town of Belo located in northwestern Cameroon following heated exchanges.

The army have for months now been engaged in exchanges with separatist elements under the banner of the so-called Ambazonia republic.

Local media portals have reported of raids by the army in many parts of the Anglophone regions – northwest and southwest. Reports say the army have often burnt down and shot people in their raids when they suspected that people were habouring separatists.

Hundreds of people are said to have fled into nearby bushes for fear of being caught in the cross fire. The United Nations has also reported that over 20,000 Cameroonians have fled into Nigeria fleeing the violence back home.

What started as a push for rights by teachers and lawyers in the Anglophone regions, have since October last year escalated into an armed confrontation between Yaounde and different separatist groups.

The main group, Ambazonia Defense Force (ADF) have claimed responsibility for some of the guerilla-style attacks that have killed over 20 members of the security forces – soldiers, police and gendarmes.

Recently, governor of the Southwest region was attacked whiles on his way for an official assignment. The armed convoy of Governor Bernard Okalia Bilai came under fire from suspected separatists on his way to and from the town of Labialem.