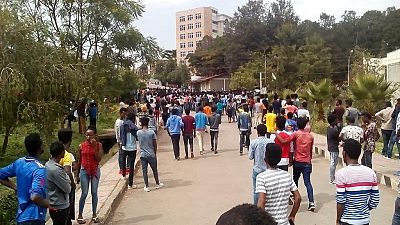 Four students detained by the Command Post administering Ethiopia’s February 16 state of emergency have been released.

Their release follows sustained protests by their colleagues in Ambo University located in the Oromia region. Ambo was the heartbeat of anti-government protests of 2015 – 2017.

The Addis Standard portal reported that the four ex-detainees, Alsan Fikadu, Ashenafi Dinqesa, Marsimoy Birhanu and Abdi Getachew, had been held for over two months. It is not known under which offences they were arrested.

The 4 students were held by the command post for almost two months. Ambo uni. students protested this morning both in and out side their campus chanting the release of the students, the lifting of the #StateOfEmergency & demanding armed security forces to vacate college premises pic.twitter.com/yq3VoQfmkh

Reports also said the wider demand of their protests was for the state of emergency to be lifted and for military personnel deployed to their campuses to be withdrawn.

The martial law measure was imposed barely twenty-four hours after former Prime Minister Hailemariam Desalegn resigned his position, according to him to allow for political reforms to be pursued.

It was imposed by the Council of Ministers reportedly to curb the spread of violence. The parliament controversially passed it in a vote that was branded as rigged. The then speaker later apologized for computation errors.

Since then, the ruling EPRDF has replaced Desalegn with Abiy Ahmed, the first ethnic Oromo to occupy the position of premier. Abiy has been in power for close to a month but has yet to publicly comment on the state of emergency.

On all his internal tours, to Jijiga (Ethio-Somali region), Ambo (Oromia region), Mekelle (Tigray region) and Gondar (Amhara region) he has increasingly called for patience and support as the government undertakes needed democratic and political reforms.

His most recent trip today (April 26) took him to the Southern Nations and Nationalities Region, where he addressed the people in the capital Hawassa. 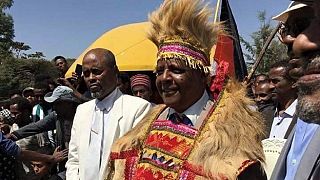