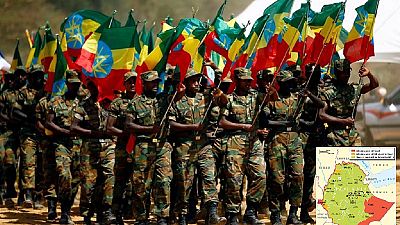 The Ethiopian National Defense Force (ENDF) has often clashed with protesters leading to deaths in the country. The latest installment was in the town of Woldiya in the northern Amhara Regional State.

The incident happened during a religious celebration of the Baptism of Christ, the Epiphany. Seven people were killed when security forces used live bullets against the unarmed Amhara youth.

From the Irreecha deaths in Oromia in 2016, which activists call a massacre, Ethiopia under state of emergency slapped in October 2016 experienced zero protests through the 10-month period.

After August 2017 when the measure was lifted the army has been found complicit for deaths in parts of the country. This article looks back, from the Irreecha incident, at the military actions that has resulted in civilian deaths.

It was in October 2016 during the thanksgiving festival by the Oromo ethnic group. At a time the region was bubbling with anti-government tension, federal forces were deployed to the event.

Activists and rights groups say over 700 people died as a result with many more injured. The government disputed the figures. A state of emergency was declared days later.

About ten people were killed in the town of Ambo again in Oromia region, German broadcaster DW’s Amharic Service reported in October 2017.

DW cited Gadisa Desalegn, Ambo city communication head, as confirming the deaths of anti-government protesters, following the deployment of ‘Agazi’ – a special elite unit of the Ethiopian security forces. Local media portals also reported that 20 people have been wounded, some private properties had also been affect in the clashes.

A local media portal, Addis Gazetta, reported that the protests were linked to shortages of sugar in the country. They shared pictures on showing protesters having blocked trucks belonging to the national sugar company.

The security forces reportedly stepped in and discharged live bullets leading to the deaths which sparked further protests.

December 2017, four months after the lifting of the state of emergency, the town of Chelenko in the Oromia region was the scene of deaths blamed on the military. Fifteen civilians lost with about a dozen others suffering gunshot wounds.

Adissu Arega said people in the region’s east Hararghe zone had hit the streets to protest the killing of an individual leading to the clashes that claimed the lives of others. The security forces were said to have applied superior force to dismantle road blocks in other parts of the region.

Locals, however, told the Addis Standard portal that a notorious Ethiopia – Somali paramilitary force – the Liyu Police – were to blame for the death of the individual, for which reason they staged the protest.

There were also deaths reported in the town of Shashamene at a point last year. The protests at the time led to social media shutdown in parts of the country.

The most recent incident happened on 20 of January 2018 during the Epiphany celebrations in the Amhara region.

The official record puts the deaths at seven even though activists maintain that the figure is much higher.

A section of the young people whiles singing, dancing and marching through the town started chanting anti-government protests leading to the clash and subsequent deaths.

People in the town said they had been concerned about why the government had deployed the army in Amhara reportedly since December last year.

The army continues to play an integral part in the country’s internal security operations. The government has always promised to bring errant soldiers to book but little is heard thereafter.

The government did not deploy the army at the 2017 Irreecha festival after their presence and actions triggered the chaos in the previous year. The event passed off peacefully as activists mourned those who died, protested against the regime and enjoyed an incident-free festival.

They have also been banned from straddling the common border between the Oromia and Ethiopia-Somali regional states where tensions led to massive deaths and displacement last year.

But an activist, Birhanu Lenjiso, who chronicled the army’s deadly clashes with the population says it dates back to decades. Amongst others, the Hawzen incident of 1988, Badano incident in 1992, Loqee in 2002, Anuak the following year, Addis Ababa incident in 2005 and triple incident in the Ogaden region 2008, 2014 and 2016 and the Konso incident in 2016.