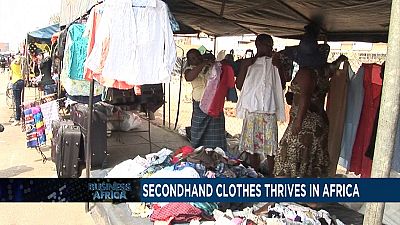 Heaps of clothes, scorching heat and choking dust, hawkers chanting prices, competing for the attention of shoppers, who haggle to get as many clothes at the lowest cost possible. In crowded markets and on sidewalks of African towns and cities, shoppers can turn up Tommy Hilfiger jeans or a Burberry jacket for a fraction of the price in London’s Regent Street or New York’s Fifth Avenue.

It is a common scene across Africa, with Ghana, Nigeria, Ivory Coast, Tanzania, Benin, Uganda and Kenya among the biggest markets for second hand clothes.

These secondhand clothes, discarded as worthless at charity shops or thrift stores in Europe or the United States and then shipped thousands of miles to another continent, provide clothing to many on a continent of 1 billion where economies may be growing but many Africans struggle to get by.

Kenya alone imports about 100,000 tonnes of secondhand clothes a year, providing the government revenues from customs duties and creating tens of thousands of jobs. It also offers quality clothes to Kenyans, many of whom earn less in a month what a pair of new Ralph Lauren khakis costs in the West.

While the market is fuelled by the affordability of its products, it only really took off when liberalisation policies introduced in the late 80s and early 90s ushered in a new age of competition in local garments industries.

Until the 1980s, high tariffs protected home grown garment and other businesses.

Then economic liberalization programmes, backed by the World Bank and International Monetary Fund, started taking hold in Kenya and elsewhere. Tariffs were lowered and local factories had to contend with new competition. Many failed and shut.

Second hand clothes filled the gap, and while alternatives were introduced in the form of new clothes from China, complaints of poor quality played in favor of the used clothes.

How does it work?

The route from donor to new owner, described by officials, exporters, wholesalers, traders and academics, takes the used clothes halfway around the world with the money made at each point racking up to a multi-million dollar global business.

Charity or thrift shops in the West sift donated items, often keeping just a quarter of the items. The rest are sold to exporters for up to 90 U.S. cents a kg, then wrapped in 45-kg bales and packed in containers – a standard 40-foot container holds about 550 bales, equivalent to about 25 tonnes of clothes.

Critics of the industry argue that Africa cannot hope to build its own industry when it is flooded with cheap imports.

Indeed, Rwanda is currently involved in a diplomatic tussle with the United States, after it banned the importation of second hand clothes into the country.

The United States responded by suspending Rwanda from enjoying benefits of the AGOA trade program which gives eligible sub-Saharan countries duty-free access to the United States in exchange for eliminating barriers to U.S. trade and investment, among others.

The ban was agreed by leaders of the East African Community, but Rwanda implemnted the ban alone, after Uganda, Kenya and Tanzania succumbed to pressure and chose the economic benefits that accrue under AGOA.

Rajeev Arora, executive director of the African Cotton & Textile Industries Federation says up to 85 percent of Kenya’s textile plants had closed since the early 1990s, while cotton output was a tenth of 1990s levels.

And thus, Africa which has countries like Mali, Burkina Faso, Chad, Togo and Uganda as producers of cotton, the raw material from which clothes are made, remains one of the places where the sale of second hand clothing is thriving!

Other experts however say it was not the used clothing imports that drove factories out of business, but inefficient production.

The informal nature of much of the trade makes it difficult to estimate precise numbers, though researchers and officials suggest it may employ hundreds of thousands.

Many banks have however recognised the opportunity that this business presents, with many setting up branches in the vicinity of such markets to serve the traders.