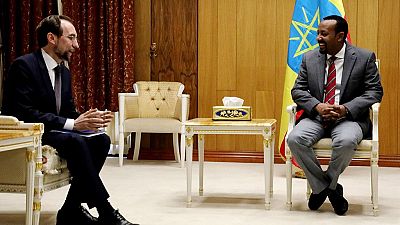 The Ethiopian Prime Minister Abiy Ahmed on Wednesday held a meeting with Zeid Ra’ad Al Hussein, the United Nations Human Rights chief who is on an official visit to Ethiopia.

According to the Facebook page of the PM, the main issues of discussion by the two parties was the subject of human rights and democracy.

Zeid arrived in the country on Sunday for a follow-up visit to an earlier one in 2017. He has since held meetings with the African Union at its headquarters in the capital Addis Ababa.

Another area of discussion was on political reforms being pursued by Ethiopia’s ruling coalition, the EPRDF. The last time Zeid was in the country, he met with other top government officials including the speaker of parliament and head of the country’s human rights body.

Aside the A.U.-U.N. high-level meeting in Addis Ababa where he emphasized the need for governments to respect rights of citizens because it was in the interest of the country so to do, he also delivered a lecture at the Addis Ababa University (AAU).

The Commissioner urged AU to strengthen the role as well as the independence of African human rights institutions, especially the African Commission on Human and People`s Rights.

AU Commission Chairperson Moussa Faki Mahamat said on his part the fight for human rights is an integral part of the agenda of the African Union. “It is an essential component of the effort that we are making for the development of African people”.

He pointed out that there is still a long way to go in order to fully attain the aspirations with regard to promotion and protection of human rights.