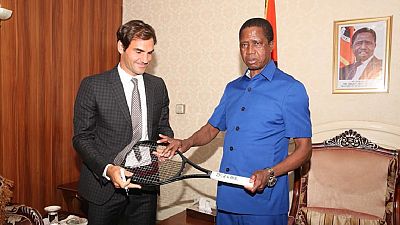 Swiss and world tennis star, Roger Federer on Monday met with Zambian president Edgar Lungu as part of an official visit to the southern African country.

The president through his Facebook page shared photos of the courtesy call by the tennis star to Zambia’s seat of presidency, State House.

Federer arrived in Zambia on Sunday as part of a working tour that is related to promoting basic education.

“I met World Tennis Champion Roger Federer who paid a Courtesy call on me at State House. He is in the country to check on his foundation, the Roger Federer Foundation (RFF), which aims at providing equitable access to quality basic education to children.

“It’s important to note that his foundation began its work in Zambia in partnership with People’s Action Forum (PAF) in August 2011 and launched a community school initiative in rural areas of #Zambiatogether with It’s local partner organization.”

On his part, Federer said “I am happy to be here. I have a heart for Africa with my mum being South African.”

The two held talks before the tennis star presented the president with an autographed racket before being shown around State House. President Lungu was shown in some of the photos trying his tennis skills.