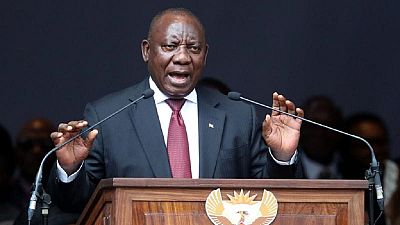 South Africa’s President Cyril Ramaphosa has cut short his visit to Britain by a day to return home to deal with protests in the country’s North West province, his office said on Thursday.

Protesters seeking jobs, better housing, roads and hospitals frequently clash with police in a country faced with weak economic growth and near-record unemployment – but these are the first big demonstrations since Ramaphosa took power in February.

The unrest, dubbed “service delivery protests”, has mounted over the years.

The latest protests erupted on Wednesday with residents demanding that the province’s Premier Supra Mahumapelo, a member of Ramaphosa’s ruling African National Congress party, step down.

Ramaphosa called for calm, ordered police to exercise maximum restraint and urged the aggrieved parties to express their grievances without resorting to violence.

He was due to return to South Africa on Friday from London, where he is leading a delegation to a Commonwealth summit.

“The president will return to Pretoria today, Thursday,” the president’s office said in a statement.

South African media reported that a bus was set alight, vehicles stoned and roads blockaded by protesters calling for Mahumapelo to quit because of a failure to adequately deliver services. Polife fired teargas to disperse the crowds.