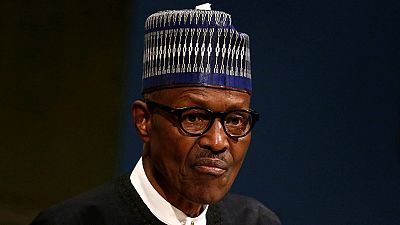 President Muhammadu Buhari has drawn criticism from social media and the opposition alike for saying many young Nigerians think they need “do nothing” to enjoy free homes, hospitals and schooling because they live in an oil-rich country.

Buhari, who said last week he will run for a second term in elections next February, made the comments in London where he is attending a Commonwealth Heads of Government Meeting.

“More than 60 percent of the population is below the age of 30,” he told a business forum on Wednesday.

A lot of them haven’t been to school and they are claiming that Nigeria has been an oil producing country, therefore, they should sit and do nothing, and get housing, healthcare, education free.

If you haven’t seen it

“A lot of them haven’t been to school and they are claiming that Nigeria has been an oil producing country, therefore, they should sit and do nothing, and get housing, healthcare, education free.”

This went down badly with the very people the 75-year-old will need if he is to remain leader of Africa’s top oil producer. The median age in the nation of around 190 million people is just 18, according to the United Nations.

His remarks prompted the ironic hashtag #LazyNigerianYouths on Twitter even though Buhari, a former general who was also a military ruler in the 1980s, did not use the word “lazy”.

Young Nigerians cited examples of their industry and fortitude in a nation where most people live on less than $2 a day, public services are poor and corruption is rife.

Dear Mr President, I may not have a job at the moment but still, you don’t have the right to call me lazy.

At least, after eating, I wash my plates… I’m sure your son doesn’t do that ? #LazyNigerianYouths pic.twitter.com/9r2xkWRs6i

I am a final year student in unilorin and run an online/offline store Vickysaccessories both on IG and twitter..i have up to 8 students on my payroll who work for me as distributors..not even hit my 2 decades yet..in months tho.
I am not lazy!!
We are not #LazyNigerianYouths

I have two degrees, One in Chemical engineering and the other in Marine Engineering.
I am ridiculously underpaid & under employed in my country and so are many other Nigerian youths

I am not lazy. My president lied or totally uninformed of the true situation #LazyNigerianYouths

I can tag at least 80 developers/techies that are shaking & breaking tables here & abroad without Government’s help.?

Others used another hashtag – #LazyNigeranPVC – in reference to the Permanent Voter Card (PVC) used to cast a ballot, linking Buhari’s comments to next year’s election.

“Dear #LazyNigerianYouths 2019 is around the corner let us get our #LAZYNIGERIANPVC so that we can show him our Laziness,” said one Twitter user called @Blessmhe.

Buhari has promised to fix the economy and reduce Nigeria’s dependence on oil but it fell into recession in 2016, largely due to low crude prices. Growth returned last year but remains sluggish, and four out of every 10 people in the workforce are unemployed or underemployed.

“Most disheartening is that these are the same young persons who form the highest demography of voters that put their confidence in him in 2015,” it said in a statement.

The PDP, which was in power in 1999-2015, has not selected a presidential candidate. Buhari himself still requires his party’s endorsement, although many see this as a formality.

Atiku Abubakar, a former vice president and erstwhile Buhari ally, said he backed the young. “I will never refer to Nigeria’s youth as people who sit and do nothing. They are hardworking,” Abubakar, who left the president’s party in November and rejoined the PDP, said in a tweet.

I will never refer to Nigeria’s youth as people who sit and do nothing. They are hardworking. I should know, I have thousands of youths working for me all over the country who have been the backbone to our success.

Abubakar, who has declared his readiness to run for president in 2019, also said “their entrepreneurial spirit, work ethic, and creative abilities are things of pride and should be applauded”.

Bashir Ahmad, a presidential aide, tweeted that Buhari had “always applauded and celebrated Nigerian youths who excel in different areas of endeavour, from sports, to academia, and other realms”.